This week, stargazers around the world enjoyed the rare spectacle of a super blue blood moon. But what if the moon were no longer just a celestial body admired from afar, but another frontier in our quest for resources? 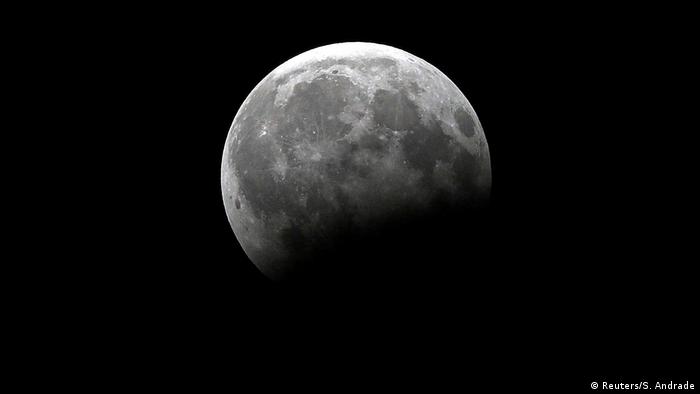 Following decades of lunar missions and research, humans have acquired an incredible understanding of the moon and its surface. It's thanks to this knowledge that private companies and space agencies are increasingly looking to advance space exploration. Tesla and SpaceX CEO Elon Musk, for instance, want to colonize Mars and send tourists to the moon. But there's also surging interest in what some are calling the "galactic gold rush." Tech companies have their sights set on space, with the aim of mining the moon for valuable resources such as rare earth metals, gold, Helium-3 and water.

It certainly raises a lot of questions: who even owns the moon, let alone its materials? And is extracting these resources economically feasible? DW put some of these questions to Ian Crawford, a professor of planetary science and astrobiology at Birkbeck College in London.

DW: Why is there a growing race to mine the moon?

Ian Crawford: I'm not sure there's really a growing race to mine the moon. I think there is an increasing understanding that throughout human history, the economies of the world have been based on the energy and material resources of just a single planet. So there's now a growing realization that as space exploration progresses, we may be able to harness some of the energy and material resources of other planets.

Read more: Donald Trump plans to send US astronauts back to moon A new mining frontier? Ian Crawford says mining the moon for resources to use in space exploration makes economic sense

So who's driving this push for lunar resource extraction?

Well, there are a number of private companies which have decided that they want to pursue this and they've raised the profile of the whole idea of mining the moon. But they haven't actually got very far yet. A lot of the near-term focus isn't the idea that we might mine the moon for things that we need on Earth, but rather, that we would mine the moon for things that we might want to use on the moon, in the context of future space exploration.

If we decide that we want to continue to explore the moon, and wish to establish a human outpost there, like in Antarctica, then these outposts would be much cheaper to operate if they could use lunar sources of water and energy, instead of having to lift all this stuff from the Earth to the moon.

Read more: Mining on the moon

Mining on the Moon

Mining on the moon

What kinds of resources exist on the moon and what can we use them for?

Every chemical element in the periodic table that exists on the Earth also exists on the moon, so, in a sense, the Earth already has everything that you might hope to find on the moon. Helium-3 has been advocated as a possible future energy source for the Earth because it could, in principle, be used to run nuclear fusion power stations to produce electricity. There are some very strident voices arguing in favor of mining Helium-3 for that purpose.

I myself am extremely skeptical about this. Helium-3 does exist in lunar soils, but only in very small quantities — typically concentrations of 4 to 10 parts per billion. So to make a significant contribution to the Earth's likely mid-21st century energy requirements, you'd have to strip-mine many hundreds of square kilometers of lunar soil every year. It would be an enormous undertaking. It's a bit like a fossil fuel that's been laid down over millions of years, and then once you've mined it, it's all gone. So if you have this money to invest in securing the world's future energy security, you wouldn't be putting it into yet another non-renewable fuel like Helium-3. You'd be putting it in very efficient renewables.

So, say we see a lunar resource extraction industry emerge in the coming decades, legally speaking, who owns the moon and the materials extracted from it?

Formally, nobody owns the moon or everybody owns the moon, depending on your interpretation of the Outer Space Treaty of 1967— the legal foundation on which all activities in space are built. Some of the things it states categorically include that no nation state can own the moon or any other celestial body. But when the treaty was formulated in 1967, no one had envisaged that private companies might be interested in mining the moon. They might not want to appropriate the entire moon, but they might wish to extract resources and sell those resources. So the Outer Space Treaty is really ambiguous on that point and before this activity really happens on a large scale, it's really quite important that we get some legal clarity on this issue.

Solar eclipse: Heavenly bodies - all in a row

Is there an economic argument for it — is mining the moon economically feasible?

And is there an environmental case for mining the moon?

The moon actually has reasonable concentrations of the rare earth elements. So, in the quite distant future, you could imagine an argument being made that if we need these elements for our high technologies — including our green high technologies like electric vehicles and whatnot — there is a possible long-term environmental benefit in mining for extraterrestrial resources. Even though the Earth has a lot of these elements, we cause damage to its surface by digging them up.

I view it as a kind of long term insurance policy. Suppose in a hundred years time we have done everything that we can to minimize humanity's footprint on the planet. But still the human population has grown to a point where it's so large, and there are so many people demanding stuff, that despite us being as efficient as possible, we still hit the finite limits of planet Earth. Then what are we going to do? And it's in that context that having the ability to start looking for resources on the moon and the inner solar system could be useful if and when we need it.

Ian Crawford is a professor of planetary science and astrobiology at Birkbeck College in London. In 2017, he was elected vice-president of the Royal Astronomical Society (RAS). He also holds the position of Chair Sub-Commission B3 (The Moon) on the Committee for Space Research (COSPAR) and is an advisor to the European Space Agency.