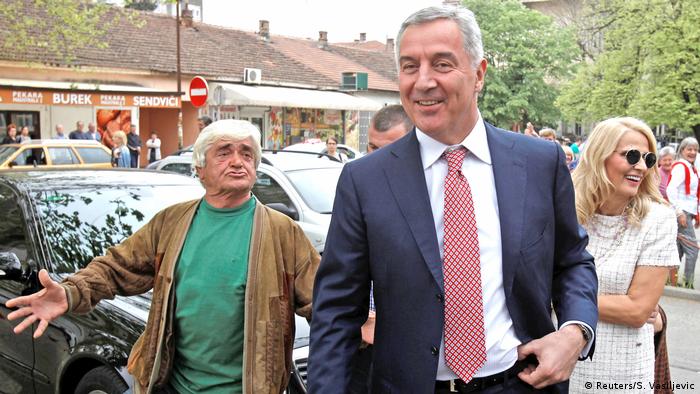 With 80 percent of ballots counted, the Center for Monitoring and Research said on Sunday that Djukanovic had won about 53 percent of the vote, ahead of his main opponent Mladen Bojanic with 34 percent.

Djukanovic's Democratic Party of Socialists (DPS) declared him the winner on Sunday evening. Parliamentary party leader Milos Nikolic said at the party's headquarters: "Djukanovic is the new president of Montenegro... there will be no second round."

Sunday's vote was seen as test for the long-time leader, who favors European integration over closer ties to Montenegro's traditional ally, Moscow.

If confirmed, the result is approbation for his move last year to defy Moscow and take Montenegro into the North Atlantic Treaty Organization (NATO).

The former prime minister and his DPS have ruled the country for nearly 30 years. Current President Filip Vujanovic did not run due to term limits.

Montenegro's presidency is a ceremonial post, but is expected to become the real seat of power in the country if 56-year-old Djukanovic is confirmed as the winner.

The ballot is the first election in Montenegro since Djukanovic's party ignored calls from Russia and joined NATO in December last year. Montenegro is also one of the favourites  to be the next country to join the European Union.

Djukanovic is the best-known candidate in the race, with his campaign slogan declaring him a "leader, statesman and president of all citizens."

The six-time former prime minister said he was running for the presidency in order to stabilize Montenegro's pro-Western path amid regional and global instability and "defend" it from Moscow's influence.

The opposition says Djukanovic has ties to the mafia, an accusation he has denied.

Mladen Bojanic was Djukanovic's main rival, having been put forward by the leading opposition party, the Democratic Front, which prefers closer ties to Russia and accuses Djukanovic of both nepotism and corruption.

Djukanovic has pared back his anti-Russian rhetoric saying he wanted "normal relations with Russia if it is prepared to do the same," but he has also said he wants the country to "remain on its road of development," which would be better achieved through ties with Brussels.

But for the 620,000 people in Montenegro, their votes may have been swayed by what work prospects are offered by the candidates rather than ties to the West or Russia. The average salary in Montenegro sits at around €500 ($615) and unemployment is more than 20 percent.

The country has also been marred by organized crime, with about 20 people killed by assassinations or car bombs over the last two years.

Germany made an impressive start to the group stage this year's European Championship, defeating Montenegro 32-19 at Croatia's Zagreb Arena. The Germans are aiming to defend the European title they won in 2016. (13.01.2018)

Grenade thrown at US Embassy in Montenegro, attacker blows himself up

A man has thrown a grenade at the US Embassy in Podgorica, the capital of Montenegro, before blowing himself up. The embassy described an "active security situation" around the facility. (22.02.2018)

Montenegro: Tight security at US embassy after grenade incident