Onlookers gasped as the painting of "Balloon Girl" shredded itself to pieces moments after the gavel came down after someone bid a million pounds. The price matched a record for the mysterious artist. 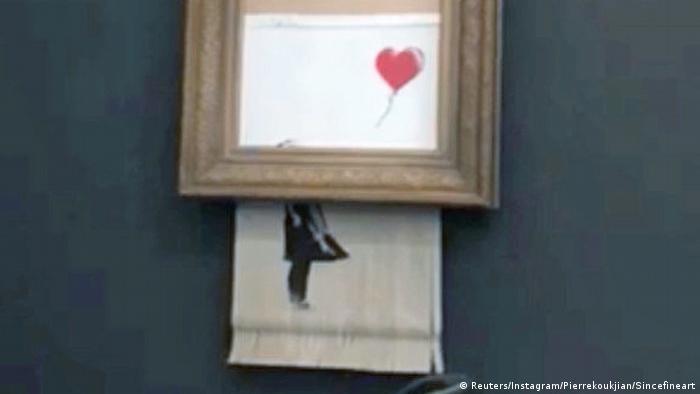 A painting by the secretive British artist Banksy shredded itself moments after it was sold at auction for a million British pounds ($1.3 million).

The painting was a copy of his famous image "Balloon Girl," which depicts a young girl reaching for a red heart-shaped balloon that has blown away.

It originally appeared in London in 2002, and Bansky has since reimagined it for several political causes including in support of Syrian refugees and against the Conservative party in the UK's 2017 election.

This version of Balloon Girl was the final item at Sotheby’s in London on Friday night . After it was sold, onlookers gasped as the bottom of the painting appeared to be sucked into a shredding machine hidden at the bottom of the frame.

Ahead of the auction, Sotheby's had noted that the ornate frame was "an integral element of the artwork chosen by Bansky himself."

The artist posted a video of the incident on Instagram, with the caption "going, going, gone…"

"It appears we just got Banksy-ed," Alex Branczik, Senior Director and Head of Contemporary Art at Sotheby's said in a statement.

"We are busily figuring out what this means in an auction context," he added.

Banksy has a penchant for elaborate pranks, including hanging an image of a spear-toting ancient human pushing a shopping cart in the British Museum, where it remained unnoticed by museum staff for several days in 2005. A year later, he smuggled a life-sized figure of a Guantanamo Bay detainee into Disneyland in California.

Banksy is not, however, the first artist to pioneer "auto-destructive art." That particular technique was first used by German-born artists Gustav Metzger, who in the years after World War II created paintings using an acid that ate away at the canvas.

Banksy to Russia: That's not my exhibition

The British graffiti artist has called out a Moscow gallery for showing his works without his approval. A rather bemused Bansky said he would never charge people to see his art. (16.08.2018)

Experts already believed the mysterious British street artist was the author of a new trail of graffiti in Paris. Banksy has confirmed that was the case by posting the works on Instagram. (28.06.2018)

COVID vaccine: Moderna shots can be 6 weeks apart, WHO says 28m ago