Hungarians should vote on whether the EU should set a quota on migrant entries, Prime Minister Viktor Orban has said. Dealing with refugees has become a matter of survival for the EU, Austria's interior minister added. 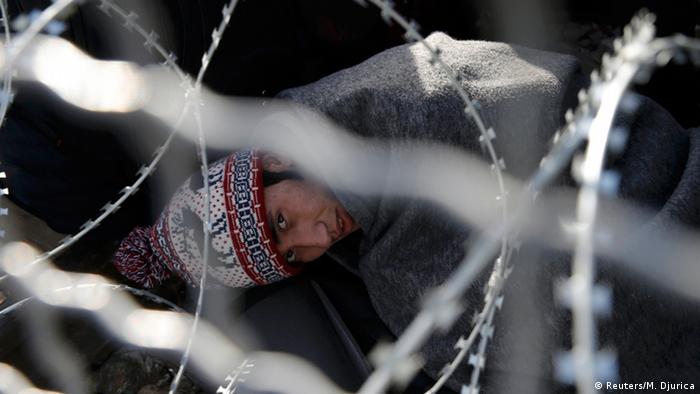 Hungarian Prime Minister Viktor Orban said on Wednesday that a referendum would ask Hungarians if the EU should "prescribe" what he termed the "mandatory settlement of non-Hungarian citizens."

He gave no date for such a vote, but said the referendum question had already been formulated and submitted to Hungary's electoral office. Late last year, EU leaders agreed to relocate 160,000 refugees from Greece and Italy across the 28-member bloc. So far, only 500 have been resettled.

Orban's call coincided with a meeting on Wednesday of Austrian and West Balkan governments in Vienna to discuss migrant issues and news that 1,000 migrants, including Syrian children, were stranded on Serbia's border into Croatia.

Neither Germany, which wants to work mainly with Turkey to protect the EU's external border, nor refugee recipient Greece, were invited to the Vienna talks.

Matter of survival for EU

That prompted German Foreign Ministry spokeswoman Sawsan Chebli to comment, "We won't get so far if everyone tries to bring about solutions on their own." 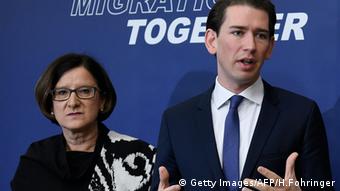 Austrian Foreign Minister Sebastian Kurz said Greece had not been invited because Athens had "clearly expressed" no interest in reducing the migrant influx from Turkey, which is a major conduit for refugees from war-torn Syria and Iraq headed to Europe.

"We have to reduce the influx now. This is a question of survival for the EU," Austrian Interior Minister Johanna Mikl-Leitner said.

A declaration issued at the Vienna meeting called for common standards on migrant registration and strict application of entry criteria. Alongside host Austria, EU members Slovenia, Croatia and Bulgaria as well as the non-EU Balkan nations of Albania, Bosnia, Kosovo, Macedonia, Montenegro and Serbia took part in the talks.

"It is not possible to process unlimited numbers of migrants and applicants for asylum," read a 19-point declaration issued following the meeting. "The migration flow along the Western Balkans route needs to be substantially reduced."

In late October, Hungary fenced off parts of its borders with Croatia and Serbia to keep out migrants - despite warnings from Brussels that isolation would not solve Europe's refugee crisis.

In recent weeks, migrants began to cut through Hungary's steel border despite the heavy presence of police, who said 501 people were caught between Friday and Sunday.

The vast majority of the 1,325 people charged by Hungary with illegal entry since September have been served with expulsion orders.

Neighboring Austria's introduction of a daily cap on asylum-seekers has prompted fears of a domino effect back along the Balkan migrant trail.

Mouzalas said Athens was looking at additional sites for transit camps to "keep people in humane conditions." For days, migrants blocked by Macedonia have been sleeping rough at the border town of Idomeni.

To cope with congestion, Greece has opened an additional army-built transit camp outside the northern city of Thessaloniki for asylum seekers from Syria and Iraq.

Afghan migrants, being blocked by non-EU Macedonia to the north are being bussed to southern Greece. 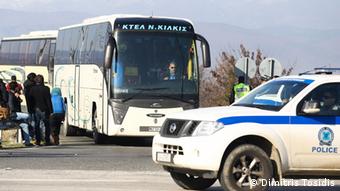 Afghans are being bused to southern Greece

UN High Commissioner for Refugees Filippo Grandi was due to visit Athens on Wednesday, where public spaces have again become the refuge for those stranded, camped on blankets or pieces of cardboard.

An Amnesty International report published Wednesday accused the European Union of being too focused on keeping migrants out and failing to prevent thousands from dying in the Aegean and Mediterranean seas in recent years.

Had the EU provided safe passage to Europe "thousands of lives" could have been saved, said Amnesty.

EU countries had "for the most part vacillated or actively obstructed potential solutions" to sharing refugees.

More than 110,000 people fleeing conflict or poverty have entered the EU so far this year, and more than 400 have already died when their boats capsized.