Migrants in Greece and the Balkans suffer in freezing temperatures

Thousands of migrants in Greece and in the Balkans have been suffering in freezing temperatures and bad weather. Local authorities have failed to prepare emergency measures, Doctors Without Borders (MSF) said. 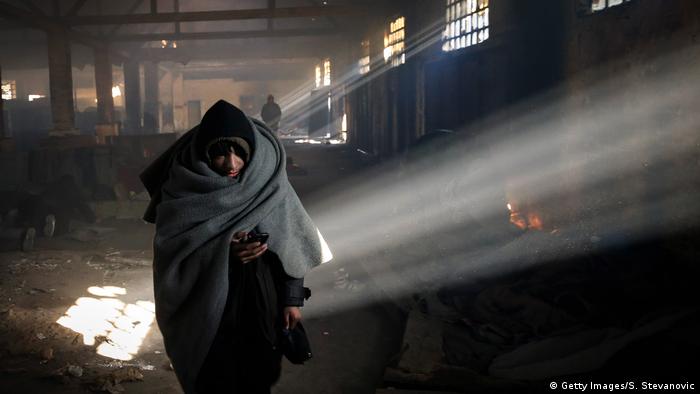 A migrant tries to stay warm in a warehouse occupied by migrants in Belgrade, Serbia

Thousands of migrants have been living in simple tents in the freezing rain as they wait for authorities to process their asylum claims, MSF said on Monday. This situation creates various health risks, the medical aid group said in Geneva. Temperatures in the northern city of Thessaloniki have dropped to minus 12 degrees Celsius (10 F) at night over the past few days.

Giorgos Kyritsis, spokesman for the government's crisis committee on migration, told Greece's Skai television that just under 1,000 people were housed in tents on the eastern Aegean islands.

MSF said that more than 7,500 migrants were currently stranded in overcrowded camps or informal shelters in Europe.

"We are witnessing the most cruel and inhumane consequences of European policies, used as a tool to deter and victimize those who are only seeking safety and protection in Europe," said Stefano Argenziano, MSF's migration coordinator.

The European Commission said on Monday that conditions for refugees on Greek islands and in other camps where they were housed in tents despite severe cold weather were "untenable."

In Brussels, Commission spokeswoman Natasha Bertaud said the commission was "doing its utmost to support the Greek authorities to address concerns relating to the reception centers and the humanitarian needs on the ground."

Migrants in Belgrade, Serbia took shelter in a warehouse near a rail station, rejecting government-provided shelters for fear they may be sent back to their countries.

Schools closed across central Serbia on Monday, but reopened in Moscow following Orthodox Christmas as temperatures rose to minus 20 degrees Celsius. It was the coldest Christmas night in Moscow in 120 years, according to media reports.

Snow snarled traffic in Istanbul and forced hundreds of cancellations at Istanbul's airport, according to the Dogan news agency. Up to 40 centimeters (16 inches) of snow fell on Turkey's largest city and halted shipping through the Bosphorus Strait.

Blizzards, icy roads and dangerously low temperatures over the past two days have claimed more than a dozen lives in parts of Europe. The harsh winter weather has also cut off towns and caused massive power outages. (08.01.2017)