Blizzards, icy roads and dangerously low temperatures over the past two days have claimed more than a dozen lives in parts of Europe. The harsh winter weather has also cut off towns and caused massive power outages.

Four Portuguese tourists were killed and some 20 others were injured on Sunday when their bus skidded off an ice-covered highway in eastern France.

Authorities said the Switzerland-bound bus plummeted into a ditch in the Saone-et-Loire region near Lyon.

Severe conditions across Europe have caused fatalities in a number of countries in recent days. Black ice across northern and western Germany was blamed for dozens of road accidents and injuries overnight. One person died near Hannover after their car skidded into a tree, the German Press Agency reported. Meanwhile, firefighters in the city of Hamburg said Sunday they had received 415 emergency calls for weather-related incidents. 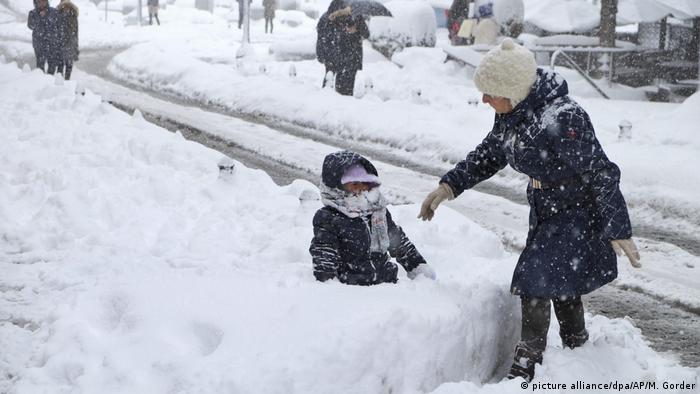 Children play in the snow in Istanbul

In Poland, two men died of hypothermia on Saturday, bringing the nation's death toll from winter weather to 55 since November 1, authorities said. Some parts of the country saw temperatures as low as minus 30 degrees Celsuis (minus 22 Fahrenheit). In the neighboring Czech Republic, three people died because of the icy weather, according to the CTK agency.

Eight weather-related deaths were reported in Italy, including a man who died of cold on a street near Florence's Arno River.

Police in Bulgaria said two Iraqi men and a Somali woman died from cold in the mountains near Turkey as they attempted to walk toward Europe.

Bulgarian authorities said a passenger train derailed in the center of the country on Sunday after it hit a pile of snow. Meanwhile, several villages to the north were left without electricity and water. Similar conditions were reported in Serbia's south, where some towns were cut off by heavy snow and around 70 kilometers (43 miles) of water pipes froze.

Europe is shivering amid icy temperatures from Poland to Turkey. Several deaths have been reported as a result of the freezing weather conditions. (07.01.2017)

Temperatures around freezing point and icy rain: Black ice caused numerous accidents over the weekend. At least six people died in central Europe. And winter is taking its toll elsewhere as well. (08.01.2017)