Migrants from Somalia and Afghanistan hit by train in Macedonia

At least 14 migrants from Somalia and Afghanistan were killed near the central city of Veles in Macedonia. They were hit by a train as they walked through a canyon, trying to reach western Europe. 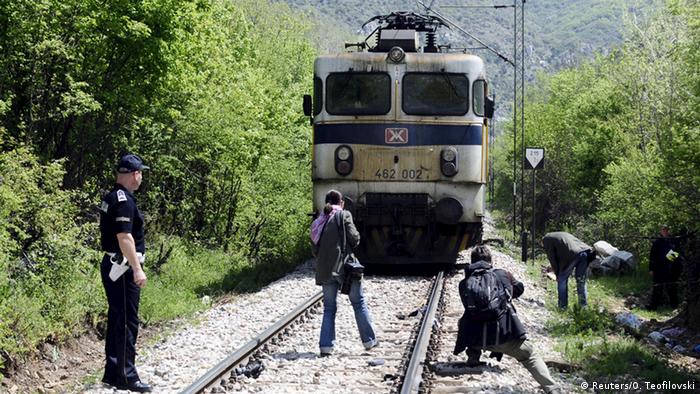 The accident happened at 10:30 p.m. local time (20:30 UTC) on Thursday, when an international train from the southern Macedonian border town of Gevgelija to the Serbian capital, Belgrade, ploughed into the group of migrants, in a gorge at Pcinja, 50 kilometers (31 miles) south of the capital Skopje.

"The driver saw a large group, dozens of people. He took action to stop the train, also used the siren, at which point some people left the track. However, the train was unable to stop before hitting and running over some of them," the prosecutor said in a statement.

The Macedonian prosecutor confirmed the 14 deaths and said rescue services found no other injured people at the site.

Rescue efforts were hampered by difficult terrain, with the site of the accident accessible only by foot or railway.

According to the local media, there may have been at least 50 migrants from Afghanistan and Somalia in the group, who walked through a canyon along an increasingly well-trodden Balkan route for migrants, with the hope of entering the European Union.

A new opinion poll has found that half of all Germans are in favor of taking in more refugees. The figure varied widely between supporters of parties on the left and right of the political spectrum. (24.04.2015)

EU leaders made a first step in emergency summit on the refugee crisis in the Mediterranean. But more needs to come because the real problem remains unsolved, says Bernd Riegert. (24.04.2015)