A migrant has been fatally electrocuted at the border between Greece and Macedonia. The death came as police and stranded migrants clashed for a second day. 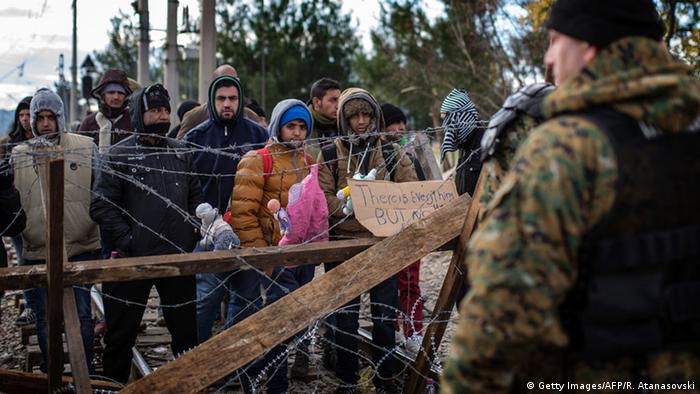 The man, believed to be from Morocco, died on Thursday after climbing onto a train wagon standing near the border and touching a high-voltage overhead cable, a police spokesman told AFP news agency.

Greek police then fired tear gas at a group of Moroccan men who picked up the man's body and advanced on the border crossing shouting "Allahu akbar" ("God is greatest").

Another Moroccan was badly burnt in a similar incident involving a train wagon on Saturday.

The death was the first casualty at the Greek-Macedonian land border, though more than 3,000 people have drowned in the Mediterranean and Aegean seas trying to reach Europe by boat.

The incident came as some 1,500 people, mostly from Pakistan, Iran and Morocco, are stuck near the Greek border town of Idomeni, demanding to enter neighboring Macedonia on their way to northern Europe. Macedonian authorities are currently allowing only refugees from Syria, Iraq and Afghanistan to pass through the country.

Train connections between Greece and Macedonia have been blocked for days by Iranian migrants who are occupying the railway tracks in protest at being stranded.

Earlier on Thursday, refugees who are being allowed to cross the border clashed with migrants who have been blocked, with both sides throwing stones at each other. Macedonian police also fired tear gas at protesting migrants who were pelting them with stones.

Late on Wednesday, several hundred migrants tried to prevent those recognized as refugees from getting through the crossing into Macedonia, shouting: "If we don't cross, no one does!"

In late November, the International Organization for Migration estimated that nearly 860,000 migrants had landed in Europe so far this year. Many of them are fleeing conflict in the Middle East, particularly in Syria, Afghanistan and Iraq.

Balkan states on the route commonly taken by the migrants have been tightening their borders to slow down the influx.

The Greek government said it is urging those migrants stuck at the border to come to Athens and apply for asylum in Greece.

Macedonian police used pepper spray and stun grenades to repel a group of several hundred migrants attempting to cross into the country from Greece. DW spoke to Interior Minister Oliver Spasovski about the incident. (02.12.2015)

Macedonian soldiers are strengthening a fence along the southern border with Greece to prevent illegal crossings. But a government spokesman said the border still remained open to refugees fleeing war. (28.11.2015)