Migrant deaths: The human cost of Nepal′s remittance-dependent economy | Asia | An in-depth look at news from across the continent | DW | 15.05.2020 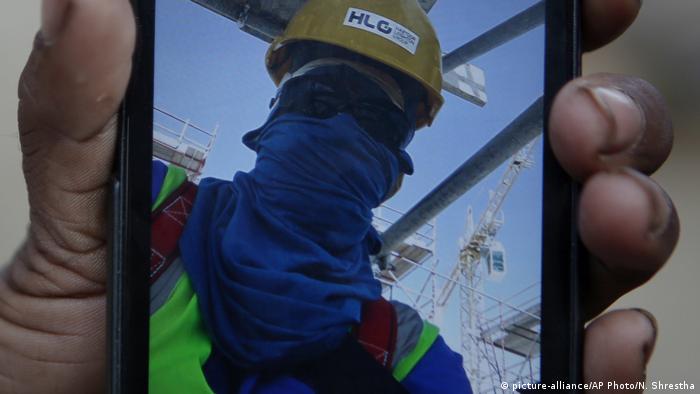 Krishna, a 62-year-old farmer from an earthquake-ravaged village in Nepal, has only visited the Tribhuvan International Airport twice. The first time was nearly five years ago, to say goodbye to his son, Indra, who was leaving to work for a construction company in Qatar. The second time was in 2019, to receive Indra's body.

Three to four bodies of Nepali migrant workers arrive in body bags at the Kathmandu airport each day. At least 7,467 migrant workers have died abroad since 2008, according to figures from the government's Labor Migration Report. Seven-hundred-fifty of those deaths were reported between 2018 and 2019.

These figures exclude workers who migrate through unauthorized channels and laborers who work in India, because of the bilateral agreement between the two countries.

The remittance that Indra sent home over the years helped fund his sisters' weddings and pay off his father's agricultural debts, but losing his son wasn't worth it, said Krishna. "No amount of money was worth my son's life," he told DW.

The longstanding debate on the impacts of labor migration and remittances within the country is taking hold again, as Nepal's economy looks set to suffer greatly due to the coronavirus pandemic. 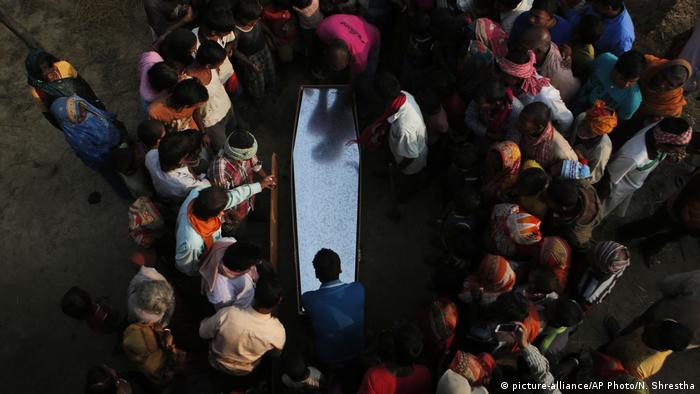 Remittance now accounts for 25% of Nepal's gross domestic product, after a bloody civil war, political uncertainty and devastating earthquakes pushed millions of Nepali workers to look for opportunities abroad, leading to a flow of outside cash into the Himalayan nation.

"Remittances have been keeping the economy afloat for a long time now. Despite the conflict and the political instability, remittances are the reason why government revenue is increasing and banks have high levels of liquidity," Chandan Sapkota, an economist with the Nepal Economic Forum, told DW.

What is killing Nepali migrants?

Nepal is the fifth-most remittance-dependent economy in the world, but the income comes at a huge human cost.

Migration experts say that there are about 3 to 4 million Nepali migrants across the globe. Most migrant deaths have occurred in Qatar, Malaysia, Saudi Arabia and the United Arab Emirates. In these countries, Nepalis form the lowest rung of manual labor, which mostly consists of "3D jobs" — dirty, difficult and dangerous.

Most of these deaths over the past decade have been attributed to cardiac arrest and other natural causes, followed by traffic accidents and suicide. However, an alarmingly high number of deaths are categorized under "unidentified" or "unknown causes." In such cases, the bodies are often cremated without further investigations or autopsies conducted by either the destination country or the authorities in Nepal.

After years of continuous pressure, however, the Supreme Court issued an order requiring authorities to conduct autopsies on Nepali migrants who have died abroad.

But despite the verdict, the official response has been slow, according to Barun Ghimire, a human rights lawyer with the Law and Policy Forum for Social Justice.

"Even after the judgment, there hasn't been a rapid response. When we followed up with the authorities in question, however, they said they are working on it. There are also powerful people with political influence involved in the recruiting agencies, so it is not easy," he said.

Experts say that the deaths attributed to heart attacks are also questionable, because many workers are young and healthy when they leave.

Meanwhile, those responsible for repatriating the dead bodies of migrants say it is a long and emotionally taxing process, which in some cases can take as much as three months, prolonging the pain of family members.

"In some cases, family members had to be hospitalized because of the trauma they suffered during the wait," said Yubraj Nepal, the director of the Center for Migration and International Relations.

"Sometimes family members don't inform the wives of these migrant workers about their death until a few days before the body arrives. They think that if they are informed of the death early on, the duration of the sorrow will be very long."

Migration and Remittance: A mixed impact

Analysts believe that labor migration and remittances have had a mixed socio-economic impact on Nepal.

Some suggest that one of the positive impacts is the changing role of women in a traditionally patriarchal society. As men go abroad, women are increasingly filling their roles at home. Remittance money also supports businesses within the country.

"There is definitely a negative impact but the number of families who have benefitted from remittances is much higher compared to those who have suffered a loss," said Arjun Kharel, the research coordinator for the Center for the Study of Labor and Mobility.

"Remittance directly reaches the household, while many development programs do not reach people directly. It has lifted a significant number of households out of poverty."

But there are concerns that the system is also disrupting the social fabric of Nepal.

"Remittances have a positive effect on the household economy, but on the social side there are some tensions," Saptoka said.

"The divorce rate has gone up, with so many husbands working abroad. Women also want to move out of the villages and into urban areas. So you have more nuclear families, while Nepal has traditionally had joint families," he added.

Chinese President Xi Jinping's recent state visit to Nepal marked the "beginning of a new era" in bilateral relations, both nations said. As China intensifies its presence in Nepal, concerns in India grow. (15.10.2019)