Migrant arrivals to Greece slow to a trickle

Nearly a week since the EU and Turkey's migrant deal took effect the number of irregular arrivals to Greece has plummeted. Greece is ramping up capacity in reception centers, preparing to deport migrants back to Turkey. 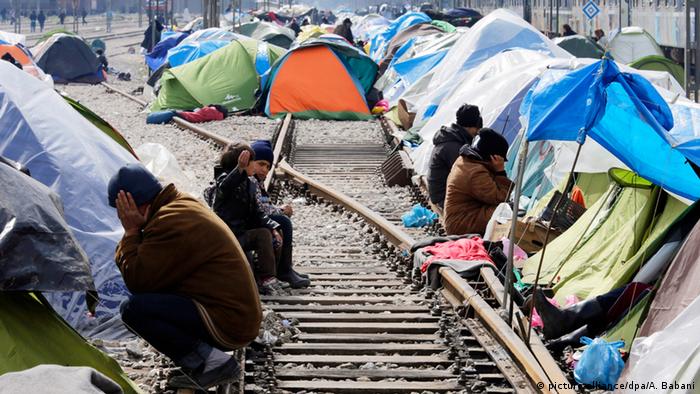 The number of irregular migrants making the dangerous boat journey from Turkey to Greece plunged to 78 in the past 24 hours, the Greek refugee crisis committee said Saturday. Closed borders and the prospect of migrants being sent back to Turkey appears to be stemming the flow.

Before a controversial EU-Turkey deal to send migrants back to Turkey went into effect last Sunday, Greece was being overwhelmed by thousands of arrivals a day.

On Monday, Greek authorities registered 1,662 arrivals to the Aegean islands, but this number fell to 600 on Tuesday, 260 on Wednesday and 161 on Friday.

The EU-Turkey deal, which seeks to cut off the main route of migrants traveling through the Balkans to Europe, provides financial and political concessions to Ankara. In return for every Syrian refugee shipped back to Turkey, the bloc must take in one from a refugee camp.

The return of migrants to Turkey is set to begin on April 4 for all migrants that illegally entered Greece after March 20.

Can Greece cope with the consequences of the EU-Turkey refugee deal?

As part of the new deal between the EU and Turkey, the Greek government wants to bring thousands of refugees from its Aegean islands to the mainland. But shelters there are ill-prepared, as Panagiotis Kouparanis reports. (20.03.2016)

Nearly 50,000 migrants are stranded in Greece, with about one-fifth at the primitive Idomeni camp on the Greek-Macedonian border. Authorities have said they started to transport migrants in buses to camps in northern Greece.

Giorgos Kyritsis, spokesperson for the government refugee crisis committee, said the operation to clear Idomeni will speed up starting Monday.

"More than 2,000 places can be found immediately for the refugees that are at the Idomeni camp, and from Monday on, this number can double," Kyritsis said.

Greek authorities plan to create enough new shelters in the next three weeks to hold 30,000 more migrants. Currently there is only enough capacity for 38,000 people at reception centers for refugees.

Athens is using the relative lull in arrivals to prepare logistics and services to process asylum applications and send migrants back to Turkey, with up to 4,000 security personnel, translators and asylum experts from Greece and the EU set to help.

Migrants stuck in Greece after Balkan countries closed their borders will have their asylum applications fast-tracked. Those for whom asylum is rejected, such as economic migrants, will be sent back to Turkey.