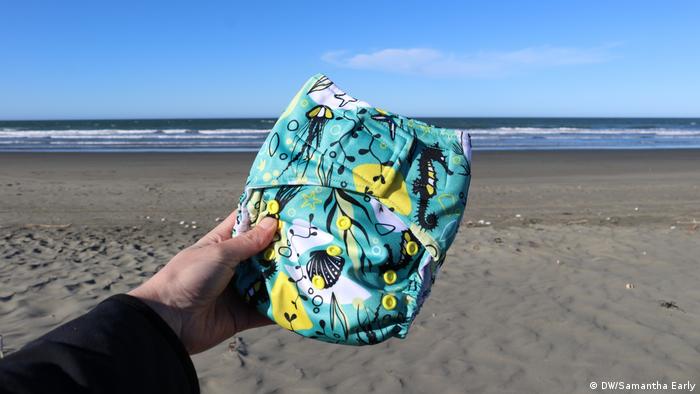 The musical octopus holds his attention just long enough to get the job done. The diaper is changed. In my baby's first year, I've done this more than 2,500 times. But unlike many parents in western, industrialized countries, I won't throw the used nappy in the trash. It'll go in the washing machine.

Modern cloth nappies fasten with hook and loop or domes. They're convenient, cost-effective and cute.

But something's been keeping me up at night: In trying to reduce our plastic consumption, am I sending loads of tiny bits of plastic into the ocean instead, every time I wash them? What would a real octopus think of my nappy wash?

Small fibers shed during the washing of petroleum-based synthetic fabrics can get through wastewater treatment plants and end up contributing to microplastic pollution, because they don't degrade.

Anastasia Michailov, a founding admin of laundry site Clean Cloth Nappies, has noticed increasing concern among the 41,000 members of their troubleshooting Facebook group. How much synthetic material actually goes down the pipe when nappies are cleaned in the washing machine?

Part of what makes modern cloth nappies work so well, according to Michailov, are the synthetic fabrics used in them.

"Microfleece works well for reusable liners, suede cloth polyesters for a stay-dry layer on inserts, polyurethane laminate for water resistant covers and shells, microfiber inserts absorb quickly and dry quick, viscose/rayon made from bamboo absorbs a lot of liquid," she said, adding that natural fibers cotton and hemp are also commonly used in the various components of 21st century nappies. Most people use a mixture.

Like Michailov, I use about half synthetics, and that's quite typical.

Olga Pantos opens up a small foil parcel. Inside is a disc-shaped mesh filter which clips into a stainless steel funnel. The senior scientist at New Zealand's Institute of Environmental Science and Research (ESR) has designed an experiment to see how many microplastic fibers come off one of my nappy washes.

I disconnect the outlet pipe in my laundry and place a bucket under it to carefully gather the 90 liters of wastewater from a full load. As I pour it, jug by jug, through the 300 micron filter, I can see clumps of tiny fibers accumulating. I pack it up carefully, deliver it to the lab and wait for the results. 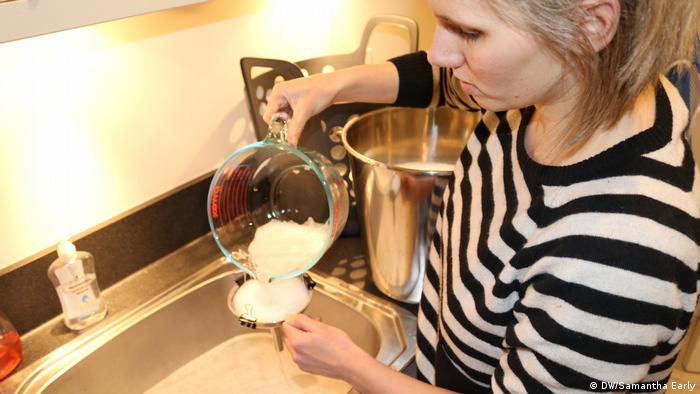 Using a 300-micron filter, Samantha Early collects microplastics from one of her loads of reusable nappy washes

If I follow the water from my machine, I reach the Christchurch Wastewater Treatment Plant 10 kilometers (6.2 miles) away, which serves about 385,000 people. Council planning engineer Mike Bourke explains that when the plant was designed, people didn't know about microplastics.

"They're so small that there's really no modern wastewater treatment systems that will effectively take them all out," he told DW, adding that early analysis has shown that each day, about 240 million microplastic particles could be being discharged from the plant into the oxidation ponds, from where the treated water is eventually piped out to sea.

But even filtered-out microplastics could be retained in the biosolids produced in the treatment process and used as fertilizers.

"It's going to be very difficult to destroy the microplastics, you'll take them out of one phase but they will end up in another phase, and unless you're into incineration of your solids for example, they are likely to remain in the environment." 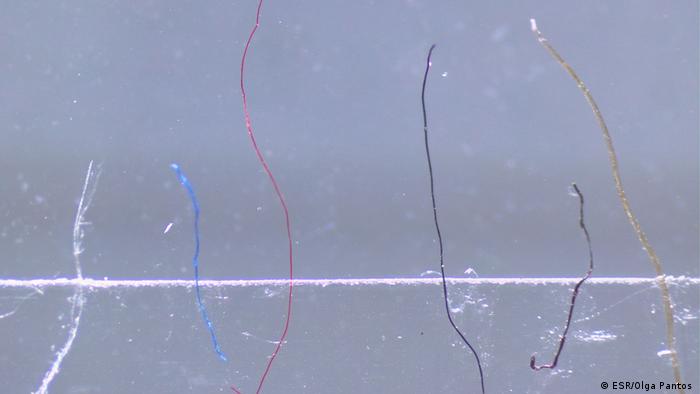 Synthetic microfibers that end up in waterways are ingested by animals, which are then, in turn, ingested by humans

I catch up with Pantos at the beach. The pipe which carries the city's wastewater 3 kilometers into the Pacific Ocean is right under our feet.

She explains that microplastics can be taken up by a range of animals, including filter-feeding mussels, worms living in the sediments, and fish.

"They can have a whole range of different impacts such as acting as little rafts for invasive species or pathogens to travel to areas that they shouldn't be in, (and) changes to the microbial communities within an environment, which are really important in things like nutrient cycling. Some studies are finding that plastic can be taken up by some of the major oxygen producers in our seas."

She says much more research is needed into their impacts and ways to remediate the problem.

"One thing we do know, these synthetic microfibers or microplastics are not supposed to be in the environment, so if they're not there they can't do any harm."

Stopping it at the source?

Michailov says Clean Cloth Nappies members are constantly asking how to prevent microplastic pollution. Many common tips,such as cold washing to minimize wear on fabrics, don't work for such heavy soiling. She's not yet seen enough evidence to support fiber-catching laundry balls, and laundry bags are not suitable for diapers: "If they're going to trap microfibers, they're going to trap poo."

Adding an extra filter to the machine has a higher success rate, she says, but that's also more of an investment.

"The best we've been able to come up with is avoid the fabrics in the first place." 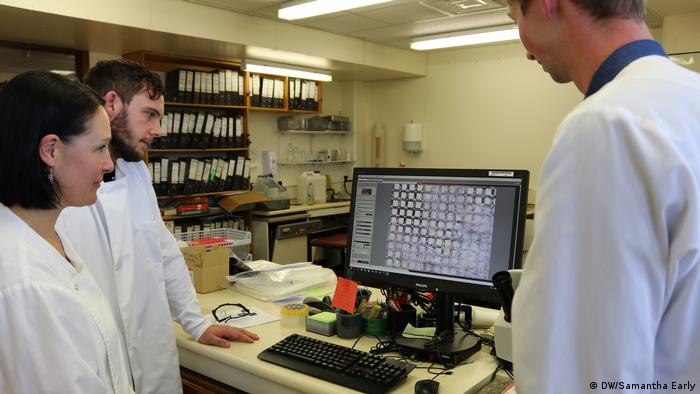 Analyzing microplastics is a labor-intensive process. In total, 102.5 milligrams of material was captured from my wash, mainly fibers. My one sample took hours to analyze, with two small sub-samples taken. Fourier transform infrared spectroscopy (FTIR) was used to identify the fibers.

"The majority of the fibers we found was the white material which was viscose, also known as rayon, and the actual proportion that were synthetics or polyester was really, really low," Pantos says.

Although man-made, viscose/rayon is regenerated cellulose and considered to be metabolisable by organisms, and therefore would not be considered a microplastic.

In total, approximately 0.5% of the fibers in the sample were microplastics. Pantos says this is because the polyester outer shells may not be shedding as much as the absorbent inners.

"If you are using a synthetic fleece liner, then you would expect to be putting more plastics out in every wash. Fleece material is really bad at losing fibers in the wash," she adds.

I'm encouraged by the overall result, especially considering the wash was 26 changes worth.

"Relative to other clothing, it's not putting out that much," Pantos concluded. "Just a teeny tiny piece of one disposable nappy would match what went through from the reusable nappies." 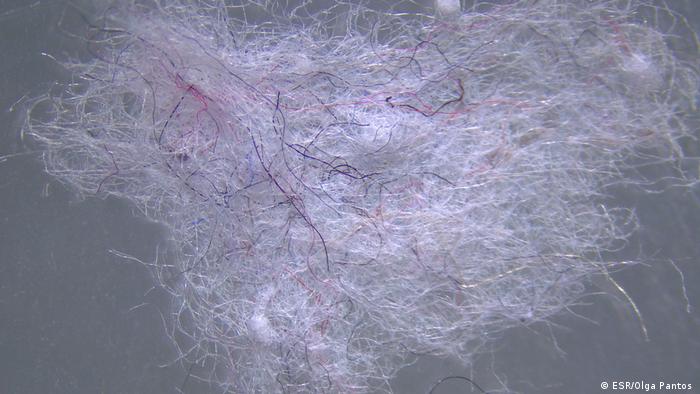 A total of 102.5 milligrams of material was filtered from a wash of 26 reusable nappies

One thing still bothered me: the question of where the plastic ends up. Is it a lesser harm to have plastics in landfill than release microplastics into the environment? Pantos cites a New Zealand landfill which washed out in a storm this year, spewing thousands of tonnes of rubbish along the riverbed and coastline.

"Just because you're putting it in the bin and it's going to landfill, doesn't mean it's gone. So by reducing what we're using, there's less of that potential to come back out again into the environment."

In other words, reducing our overall plastic use is key, according to Pantos.

So where next? I'll keep using the nappies I have, but if I need more I'll choose natural fibers where possible. I'll look into ways to reduce shedding for my non-nappy laundry and keep trying to reduce our overall plastic consumption. Then, hopefully, my earth-loving conscience will be as clean as my nappies.

Or, as Anastasia Michailov from Clean Cloth Nappies puts it:

"I figure you can't do everything perfectly, but if you do improve something, it's going to help."

Doing Your Bit: Check products before you purchase