It hasn't really been a January transfer window to get the pulse racing. Yunus Malli to Wolfsburg and Dayot Upamecano to RB Leipzig top an underwhelming list of Bundesliga acquisitions this month.

However, Borussia Dortmund’s swoop for Alexander Isak is a squad addition that in the years to come, could prove shrewd, given that Dortmund have snatched one of Europe’s rawest but most exciting teenage talents right from under the noses of Real Madrid.

We’re unlikely to know whether the 8.6 million euros ($9.2 million) spent on the young forward, who is Sweden’s youngest ever goalscorer, was worth it - but Dortmund are assembling the single most exciting collection of young talent anywhere in the world. There’s simply no better place for Isak’s development than at the Westfalenstadion.

Sporting director Michael Zorc, alongside Dortmund’s general manager Hans-Joachim Watzke, is overseeing a transfer policy that targets only the cream of burgeoning football talent. The club is becoming renowned for giving young players a chance with the likes of Ousmane Dembele (19), Christian Pulisic (18), Julian Weigl (21) and Raphael Guerreiro (23) already established first-team players. Teenagers Felix Passlack and Emre Mor have also played in the first team this year, as all of Dortmund's stars have benefited from Thomas Tuchel’s tutelage.

Eyes around the world

Dortmund are exhausting every tentacle of their global scouting network too. Mor was signed from Danish club Nordsjaelland, Pulisic plucked from American minnows Pennsylvania Classics, and Weigl seized from 1860 Munich. When you consider that before the current crop, Zorc was also responsible for the signings of Mats Hummels from Bayern Munich, Ilkay Gündogan from Nuremberg, Robert Lewandowski from Lech Poznan and a host of other Dortmund favorites, Zorc’s influence at Dortmund cannot be understated.

The only difference between now and then is that Watzke and Tuchel have started to put increasing faith in Zorc’s judgement, and the club now almost exclusively signs players under the age of 23, a strategy that RB Leipzig have had in place since Ralf Rangnick’s appointment as the club’s sporting director in 2015. Leipzig have seen their faith in youth pay dividends in emphatic fashion this season, and Dortmund are hoping their young crop can gel as a team and challenge Bayern at the top of the Bundesliga sooner rather later. 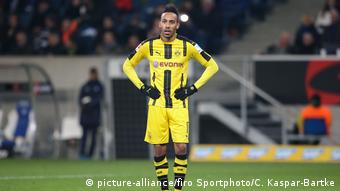 Will he stay or will he go in the summer: Pierre-Emerick Aubameyang

While the title is beyond Dortmund this season, a top-four finish would represent a successful campaign for a squad that has undergone such upheaval in the last couple of years. Building an understanding on the pitch is not something money can usually buy, and patience will be required  from Dortmund fans over the next year or two as they hope to watch their team mature into a force that can challenge Bayern once again. A decent run in this season's Champions League knockout stage would also be a welcome boost.

Dortmund are not as far away from reaching that point as is immediately obvious. There will be a moment when the team clicks into gear, even if they still need experienced defensive additions to help bring them to the elite level of Bayern.

Not all of Dortmund’s class of 2017 will develop into world-class players, but combined with the world-class talents already at the club - Pierre-Emerick Aubameyang, Marco Reus and Mario Götze, if he can ever rediscover his form - Dortmund are building a team that in two to three seasons will be capable of challenging for domestic and European silverware.

With a record 463 appearances for the club, Zorc was already a club legend. But the work he is currently doing behind-the-scenes is only cementing that reputation as Dortmund build a team that is poised to challenge Europe’s best once again.