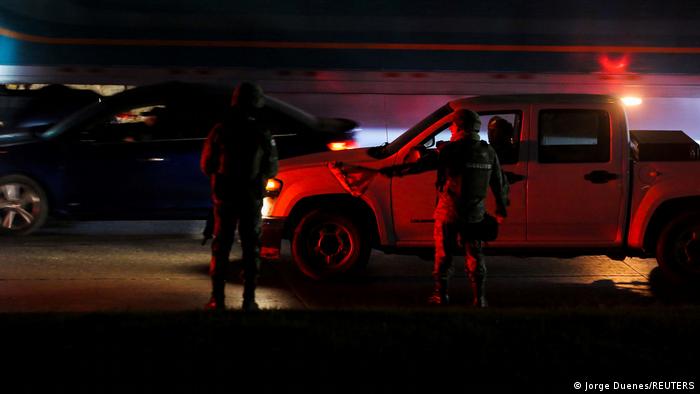 At least 11 people, including a child and a radio presenter, were killed in a wave of violence reported at least four Mexican cities on the US border. Gang members were targeting civilians, demolishing stores and cars, and justifying the brazen criminality as retaliation for efforts of authorities to arrest their associates.

The Los Angeles Times reported troops were deployed Friday to Ciudad Juarez, across from the US city of El Paso, Texas. The AFP news agency put the size of the Ciudad Juarez contingent to about 600 soldiers.Classes and public events in Ciudad Juarez had been canceled on Thursday due to acts of violence.

What is happening in Tijuana?

In Tijuana, the US Consulate instructed employees "to shelter in place until further notice" around midnight Friday due to the violence.

Montserrat Caballero, the mayor of Tijuana, blamed the outburst on gang rivalries. He called on "organized crime," meaning the drug cartels, to stop targeting innocent people. In a video message he said that "Tijuana is going to remain open and take care of its citizens."

Bus and van transport connections were called off in Tijuana following a night of disorder, leaving some stranded.

On Saturday, Caballero announced that authorities had detained 17 individuals, including seven in Tijuana, and four in Rosarito and Mexicali each. Some suspects were said to be linked to the Jalisco cartel, blamed for lighting stores on fire and shooting at random people in Jalisco and Guanajuato states earlier in the week.

Tijuana, located on the southern border of the US state of California, is an enormously lucrative corridor for drug-trafficking. It was long dominated by the Arellano Felix cartel, but it is contested by various gangs, among them the Jalisco and Sinaloa cartels.

In Ciudad Juarez, nine people were killed, including four employees of Mega Radio station during a live broadcast outside a pizzeria. That eruption came after a fight at a local prison between rival gangs resulted in the deaths of two prisoners. Guns and Molotov cocktails were the weapons of choice, and the station canceled its broadcasts in protest.

That prison fight erupted between members of a gang known as "Los Mexicles" who fought against "Los Chapos," both factions of the Sinaloa cartel run by Juan "El Chapo" Guzman, currently incarcerated in the US.

In Baja California, authorities said 24 vehicles had been set on fire in various locations including 15 cars in Tijuana, three in Rosarito, and two in Mexicali, Ensenada and Tecate each.

On Tuesday, in the western states of Jalisco and Guanajuato vehicles burned and businesses were targeted in response to efforts to take down a senior leader in the Jalisco cartel.

"It wasn't just a clash between two groups, but it got to the point where they began to shoot civilians, innocent people," he said on Thursday. "That is the most unfortunate thing in this affair."