There are now over 100,000 people in Mexico's national register of the "disappeared." The UN says organized crime is among the leading causes of missing people in the country. 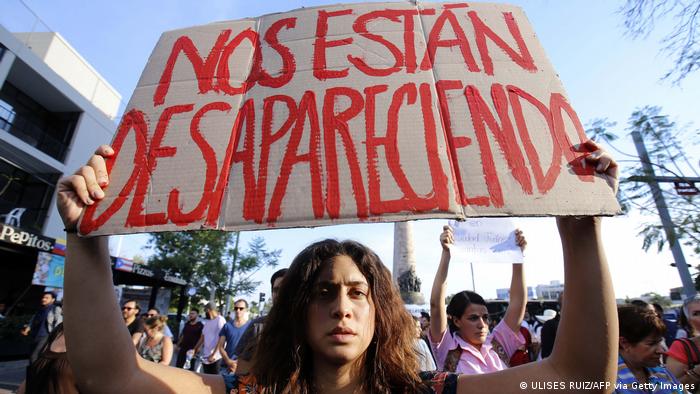 Mexico's official figure of missing people on Monday surpassed 100,000 for the first time as families pushed authorities to do more to find victims of violence linked to organized crime.

The interior ministry compiles a national register of the "desaparecidos" — Spanish for missing people —  which is periodically updated.

Calls for government to do more

Mexico has seen spiraling violence since the war on drugs began in 2006, with over 350,000 people having died since then.

Last year, the country of more than 129 million people saw 94 murders a day on average.

"It's incredible that disappearances are still on the rise," Virginia Garay, whose son went missing in 2018 in the state of Nayarit, told news agency Reuters.

Human rights organizations and relatives of the missing have called on the government to step up investigations and conduct searches more effectively.

"The government is not doing enough to find them," said Garay, who works in a group called Warriors Searching for Our Treasures that seeks to locate missing loved ones.

Fears that the actual number of missing is far higher

Civil society groups that help try and locate missing people stress that many families do not report disappearances because of distrust in the authorities.

The actual figure of missing people is therefore believed to be much higher than the official data.

"Organized crime has become a central perpetrator of disappearance in Mexico, with varying degrees of participation, acquiescence or omission by public servants," a report by the UN Committee on Enforced Disappearances, released last month, said.

The missing people include human rights defenders, some of whom went missing because of their own involvement in the fight against disappearances.

According to the UN committee, over 30 journalists have also disappeared in Mexico between 2003 and 2021.