Andres Manuel Lopez Obrador has won Mexico's presidential election with more than 50 percent of the vote. He is Mexico's first leftist president in decades. 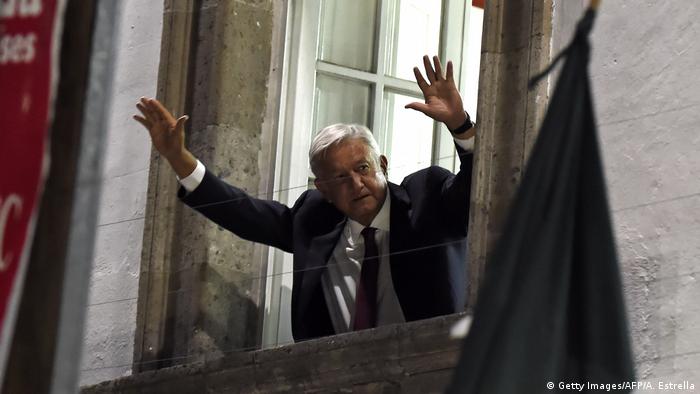 According to the first official projection, Ricardo Anaya of the conservative National Action Party (PAN) won between 22.1 and 22.8 percent, Jose Antonio Meade of the ruling Institutional Revolutionary Party (PRI) between 15.7 and 16.3 percent, and independent candidate Jaime Rodriguez between 5.3 and 5.5 percent.

"Peace and tranquility are the fruit of justice," Lopez Obrador said as he pledged "a plan of reconciliation and peace for Mexico." He is the first presidential candidate to receive more than 50 percent of the vote in more than three decades.

Mexican voters abroad hold more sway than ever before

Lopez Obrador, also known as AMLO, won over supporters with an anti-establishment platform and promises to clean up corruption, combat soaring crime levels and help millions get out of poverty. Rivals have warned he could set the country back with his interventionist economic policy.

Read more: Why Germany's cultural ties with Mexico are more important than ever

The 64-year-old former mayor of Mexico City lost two earlier bids for the presidency in the 2006 and 2012 elections. He will replace President Enrique Pena Nieto, who was limited to one term in office by the constitution, on December 1.

US President Donald Trump congratulated Lopez Obrador Sunday evening, writing on Twitter that "there is much to be done that will benefit both the United States and Mexico!" Trump's anti-immigration policies, his rhetoric about Mexican migrants and anti-trade stance have plunged ties between the US and Mexico to a historic low.

In an interview Monday with the Televisa news network, Lopez Obrador said Trump's congratulations message "was very respectful. That is what we always want to maintain with the US government, that there be mutual respect."

Lopez Obrador said he would contact Trump to "reach an understanding" and that he supports reaching a deal on
renegotiating the North American Free Trade Agreement (NAFTA) with the US and Canada.

NAFTA talks have been impeded due to the US government demanding more US content and a "sunset clause" for the 1994 trade agreement.

He later spoke with Trump on the phone and offered to reduce US-bound migration in exchange for American assistance.

"I received a phone call from Donald Trump and we spoke for half an hour," he wrote on Twitter.

"I proposed exploring a universal deal (involving) development projects that would create jobs in Mexico and, by doing so, reduce migration and improve security."

Trump also mentioned the phone call in an Oval Office briefing, saying "I think the relationship is going to be a very good one. We had a great talk."

Officials estimated voter turnout at 63 percent among the 89 million people who were eligible to vote in Mexico's biggest-ever elections. More than 3,000 offices were up for grabs, including 500 seats in the Chamber of Deputies, 128 in the Senate and eight governorships.

Lopez Obrador's coalition, which is led by his Morena party, looked like it was also on track to snag several other key posts, including at least five of the nine governor's races that were on the ballot.

Mexico City also elected a woman as mayor for the first time in history, exit polls showed. Claudia Sheinbaum, a Jewish scientist and left-wing politician with Morena, was set to take between 47.5 and 55.5 percent of the vote.

The murder of a political activist on Sunday cast a shadow over the polls. Flora Resendiz Gonzalez, a Workers' Party activist, was reportedly shot dead as she was leaving her home in Contepec in western Michoacan state, local media reported.

Later in the day, a second member of a political party was killed as well. Fernando Herrera Silva, a member of the ruling PRI party, was gunned down in Acolihuia, in the central state of Puebla, his party said.

"We demand the state guarantee the security of this electoral process," the PRI said in a statement.

The deaths highlighted the brutal violence and corruption that have angered voters in Mexico, adding to what was already considered to be one of the most violent electoral campaigns in the country's history. An estimated 145 politicians have been killed since September.

Guantanamo: US moves to try suspects in Bali bombings 13m ago