The bullet-ridden bodies of the cartel members were discovered in the north-central state of Zacatecas. Earlier this week, two missing police officers were found hanging from a bridge in the same area. 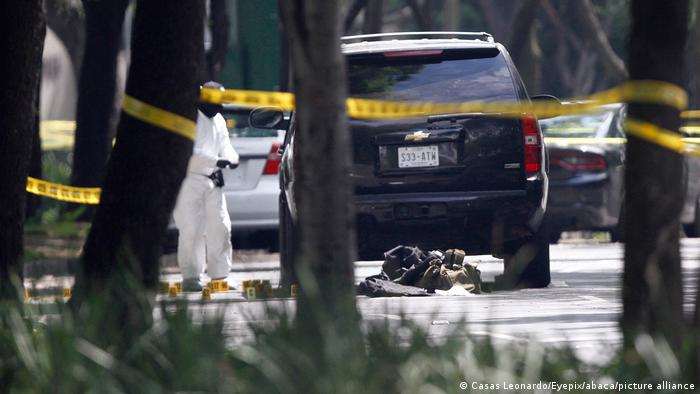 Eighteen bodies were discovered Friday after what appeared to be a shootout between members of rival drug gangs in northern Mexico.

The deadly incident occurred in a remote area in the northwestern state of Zacatecas, and came days after a similar shootout in a town close to the US border.

State security department spokeswoman Rocio Aguilar said there was evidence the shootout resulted from a confrontation between gunmen from the Sinaloa and Jalisco criminal cartels over drug trafficking routes.

Three vehicles, one of them burned out, were also found at the scene.

On Wednesday, seven people were also shot to death in a neighboring city in the state.

On the same day, the bodies of two abducted police officers were found hanging from a bridge in the state capital.

Gunmen from cartels often hang bodies to send out a message to either authorities or rival members, but they seldom target law enforcement officials.

Aguilar said authorities have not found a link between the discovery of the officers' bodies and the latest gun battle.

What triggered the shootout?

The state of Zacatecas, once dominated by the old Zetas cartel, has been the scene of many inter-cartel battles.

Several other groups, like Sinaloa, Gulf and Northeast drug cartels are also involved in violent turf battles in the area.

Mexico's drug wars have claimed more than 300,000 lives since 2006, when the government started deploying federal army troops to fight the country's powerful cartels.

Mexican police officers arrested for killings near US border

A dozen Mexican police officers are facing charges after 19 people, including at least two migrants, were found shot and burned near the US border. The region is caught in a bloody drug war.

It was Harris' first visit to the border as vice president, coming as the US experiences a surge in irregular migration. The Biden administration's immigration policy has drawn sharp criticism from Republicans.

Authorities are probing the deaths in Tamaulipas state where large swaths of land are controlled by the Gulf drug cartel. Mexico is experiencing a wave of violence linked to drug gangs fighting over routes to the US.