Chancellor Angela Merkel has paid a visit to one of the poorest neighborhoods in Germany. Its residents did not seem altogether convinced that such a quick pit stop would really help their struggling district. 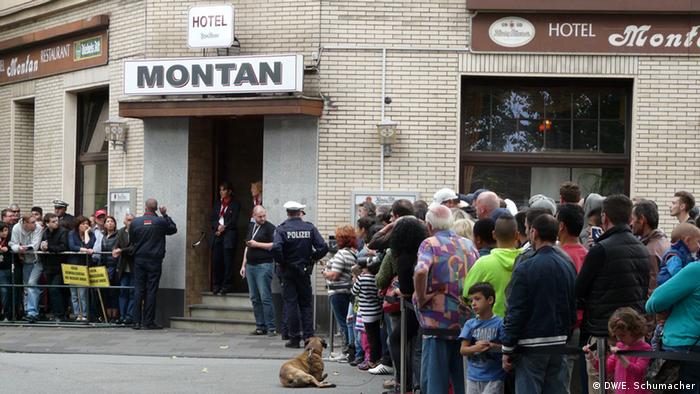 The chancellor was in the district of Marxloh in Duisburg on Tuesday as part of her "Good Living in Germany" series of town-hall meetings. Her previous stops included her neighbors in Berlin and the northern city of Rostock, which famously included a crying young asylum seeker and the chancellor's awkward attempts to console her.

Much was made of the choice of Marxloh - dubbed a "no-go" zone by the German media: Its unemployment rate (16 percent - more than double the national average), the fact that 64 percent of Marxloh's around 19,000 residents have foreign roots, and a crime rate that has left police confounded.

A struggling but vibrant neighborhood

There is a deal of truth to the media's image of Marxloh, it has a clear air of neglect and one can see how the decline of the steel industry in the Ruhr Valley in the 1970s and 80s has taken its toll. There are many boarded-up shop fronts, there's litter and drinking on the streets. But the neighborhood is also a lively one, home to rows and rows of bridal shops displaying poufy white dresses and children playing together after school. 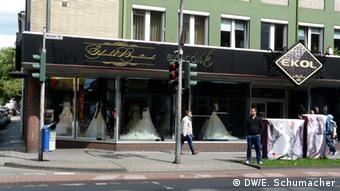 Marxloh is famous for its high concentration of bridal shops, one right next to the other along its main roads

Indeed, if it really is a "no-go" zone at night, it certainly did not have that feeling during Merkel's visit. As the 60 or so hand-picked guests from the area conversed with the chancellor inside the unassuming Hotel Montan, the relatively small crowd who waited outside to catch a glimpse was mostly made up of children, and the parents who wanted to give them a treat. Three generations sat on a stoop together to wait for a glimpse of Marxloh's guest.

For their part though, most of the kids seemed much more interested in the police motorcycles and Tasers than seeing the chancellor.

Most responses to Chancellor Merkel's visit were expressions of disinterest. "I don't care," one woman told me. "She's here for an hour, and then off again. Good-bye!" her friend elaborated.

Some were cautiously optimistic. One man told me he thought it was "good she's bringing attention to our neighborhood." He added that most residents of the quarter had Bulgarian or Romanian backgrounds, like himself. Most of the positive statements were similarly muted: "A short visit is better than nothing" or "Well, maybe it will help something."

A group of teenagers, however, made it clear they did not appreciate the hubbub in their district, calling sarcastically to the photographers to "come look at the foreigners!" and blaming "the Nazi" for blocking their street.

Around the corner from the Hotel Montan an even stranger scene was unfolding. Many more police officers than could be seen outside the hotel were guarding a barrier behind which stood a grand total of four anti-refugee protestors from the right-wing euroskeptic party "Die Republikaner" (the Republicans). 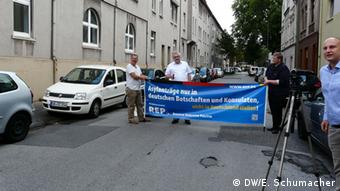 The small demonstration against Merkel's presence and her refugee policy caused consternation with the locals.

"Go away! We don't need you!" said the man at the microphone, speaking supposedly to the 800,000 refugees Germany expects to arrive within its borders this year. "Integration specialists, counselors, translators and interpreters being paid by your tax money," he shouted at the bemused group of onlookers.

"We don't need you either!" one resident screamed back, leading to a verbal barrage between himself and one of the "die Republikaner" members, who insisted they were not against "eastern European..Yugoslav…Turkish…" (he seemed to be searching the man's face for a reaction to one or the other) immigrants who came to work and "contribute to society."

After her "citizen's dialogue" and a two-hour workshop, Merkel promised to promote the interests of people with a migration background, and decried the treatment of people "who had great-grandparents here" as outsiders, and the tendency to still look at them as foreigners.

Whether her pit stop can affect change in the struggling area remains to be seen. As one woman from Marxloh put it: "She comes. She goes. But we have to stay here."

A refugee home has caught fire in Germany, raising concerns over anti-migrant attacks. Meanwhile Chancellor Merkel faces tough questions during her visit to a problematic immigrant neighborhood in the country's west. (25.08.2015)