Merkel will not recognize unilaterally-declared Palestinian state | World | Breaking news and perspectives from around the globe | DW | 07.04.2011 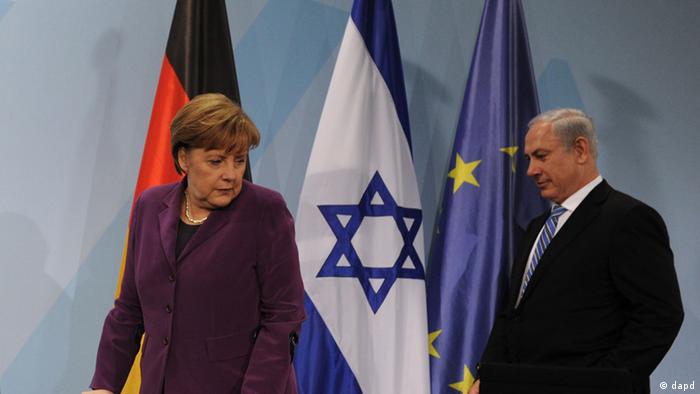 Chancellor Angela Merkel said Germany would never recognize any Palestinian state if it were declared without Israel's acceptance.

After talks with Israeli Prime Minister Benjamin Netanyahu in Berlin on Thursday, Merkel said she supported a two-state solution, with Israel and a Palestinian state coexisting side by side.

However, she added that this could only be acceptable to Germany if Israel itself recognized Palestinian independence. Palestinian officials have said they might declare statehood in September.

"When it comes to the question of recognizing a Palestinian state, I repeat again that Germany is working for there to be a two-state solution," said Merkel. 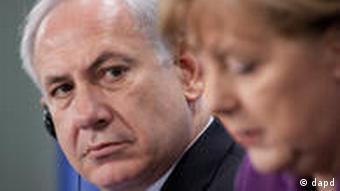 Merkel's office denied reports she had fallen out with Netanyahu

"Unilateral recognitions therefore definitely do not contribute to achieving this aim... This is our stance now and it will be our stance in September."

"There needs to be mutual recognition, otherwise it is not a two-state solution."

The Palestinians have pledged to seek UN recognition of an independent state within borders established in 1967 - with east Jerusalem as its capital, despite Israel pressing ahead with controversial plans to build Jewish homes there. Netanyahu is on a diplomatic tour aimed at convincing western allies not to acknowledge the state.

Merkel, who referred to some "controversy" during the meeting, said that the talks had been "very friendly and very direct."

She added that restoring momentum back to the stalled Middle East peace process was "more pressing than ever."

Merkel's office has denied that the chancellor and Israeli prime minister had fallen out in a highly-charged telephone conversation in February, with Merkel accusing Netanyahu of failing to make progress on peace.

Meeting Israeli officials in Jerusalem, German Chancellor Angela Merkel has called for a concerted effort to get the Mideast peace process back on track, on the second day of her two-day visit to Israel. (01.02.2011)

Two weeks after the Middle East diplomatic quartet said peace talks in the region could be wrapped up within a year, parties in the conflict are in Washington for a new round of negotiations. (02.09.2010)

Shireen Abu Akleh: Palestinians give bullet that killed journalist to US experts 02.07.2022

The renowned Al Jazeera journalist was fatally shot in May while covering an Israeli military operation in Jenin. Palestinian officials have now handed over the bullet to US forensic experts.