In a speech following the G20 Summit in Brisbane, German Chancellor Merkel said the Ukraine conflict could have wider ramifications. Russian President Putin defended his country's actions on German TV. 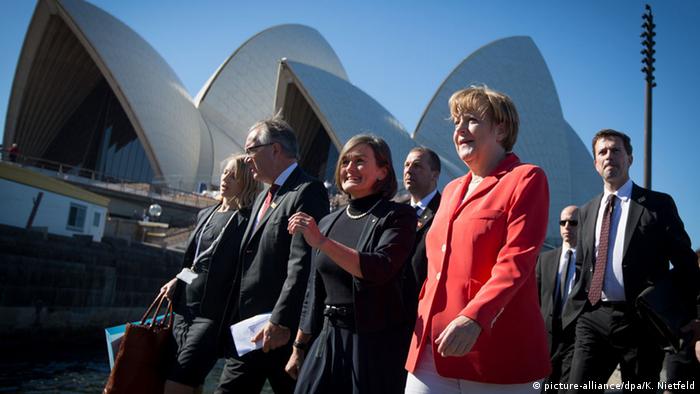 Angela Merkel made a number of specific references to the policies of Russian President Vladimir Putin in her speech at the Lowy Institute for International Policy in Sydney on Monday, referring specifically to the conflict in Ukraine. She warned that the consequences could spread beyond Ukraine.

"The Ukraine crisis is most likely not just a regional problem," she told the Australian think tank. "In this case, we see it affects us all."

Referring specifically to Russia's move to annex Crimea in March, Merkel said it had "called the whole of the European peaceful order into question, and it has continued by Russia exporting its influence to destabilize eastern Ukraine."

Merkel, who grew up in former East Germany, said she did not want the former conditions of the Cold War to be reinstated, when Moscow had to be consulted on just about everything.

Just over a week after Merkel joined the rest of Germany in celebrating the 25th anniversary of the fall of the Berlin Wall, Merkel said it was time to "show what we've learned from that."

"The biggest danger is that we allow ourselves to be separate, to be divided, that a wedge will be driven between us."

On Sunday, German public broadcaster ARD aired a 30-minute interview with Putin in which he said he believed there was a way out of the conflict in Ukraine. He added his criticism of the government in Ukraine, however, saying it was Kyiv's policy of using force rather than dialogue that was making a solution difficult.

"I'll say this bluntly: we're very concerned that the desire could arise to use ethnic cleansing," Putin said. "We're afraid about a drift toward neo-Nazism. There are people with swastikas on their sleeves running around and armed forces with SS symbols on the helmets. That's why we fear there's a drift in that direction. It would be a disaster for the people in Ukraine."

Merkel and Putin held extensive talks on the sidelines of the recent G20 summit in Brisbane, which wrapped up over the weekend.

After the G20 summit, Europe moves on the Ukraine crisis

Critical words from Western leaders don't seem to have bothered Vladimir Putin. Following the G20 summit in Brisbane, he seems content to continue the confrontation. Europe, meanwhile, is repositioning. (16.11.2014)

Chancellor Angela Merkel has spent several hours at the G20 summit in talks with Russian President Vladimir Putin, joined later by EU Commission boss Jean-Claude Juncker. The talks are thought to have focused on Ukraine. (15.11.2014)