Chancellor Angela Merkel has spent several hours at the G20 summit in talks with Russian President Vladimir Putin, joined later by EU Commission boss Jean-Claude Juncker. The talks are thought to have focused on Ukraine. 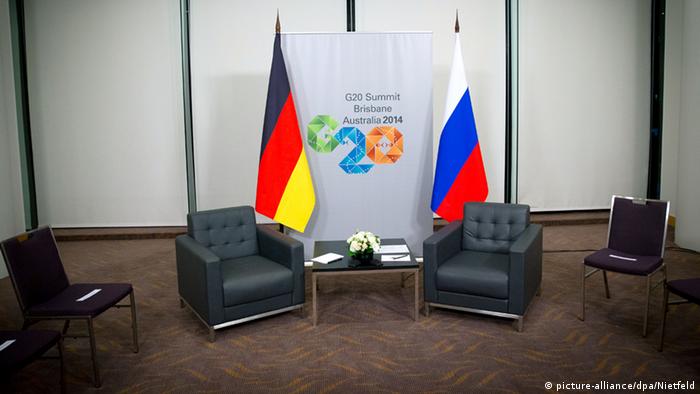 G20 heads of state and government entered Sunday, the final day of the summit in Brisbane with Russia's Vladimir Putin ostracized and facing Western warnings that Moscow risked more economic sanctions over its alleged support of separatist rebels in eastern Ukraine.

Media speculation that Putin might prematurely leave what was supposed to be an economic summit was denied by Kremlin spokesman Dmitry Peskov.

"This is wrong. The president is taking part in all the [G20] events," Peskov said.

Since April's outbreak of a separatist insurgency against the Kyiv government, Moscow has denied arming pro-Russian rebels and sending military equipment.

DPA reported that her one-to-one talks with Putin lasted for two hours before they were joined by European Commission President Jean-Claude Juncker. The three-way talks then ran for around four hours.

Van Rompuy said EU leaders at Sunday's G20 session intended to consult with US President Barack Obama, who was also in Brisbane. He called on Putin to halt alleged weapons deliveries.

Earlier, at a brief press conference, Merkel had said the EU was considering further financial sanctions against Russian individuals in relation to the Ukraine crisis.

"The present situation is not satisfying," she told reporters. "At present the listing of further persons is on the agenda."

Merkel added that it was obvious that the geopolitical strains were not beneficial in relation to the summit's intended goal - reinvigorating the global economy.

At Sunday's closing session, G20 leaders were to focus on a plan to spur global economic growth and create jobs.

The "Brisbane Action Plan," based on a prognosis drawn up by the International Monetary Fund (IMF), would aim to inject two percent growth into the world economy and create 20 million new jobs worldwide.

President Obama was due to hold talks with the Japanese and Australian prime ministers, Shinzo Abe and Tony Abbott on Asia-Pacific security.

Obama said those talks were not meant to antagonize rising power China.

"By virtue of its size and its remarkable growth, China will play a critical role in the future of this region," Obama said during a speech at a Brisbane university.

Visiting China earlier in the week, Obama emerged with a surprising level of concensus with Chinese President Xi Jinping about the need to reduce climate-damaging carbon emissions.

Tackling climate change has featured little so far on the summit agenda.

G20 leaders promised on Saturday to "extinguish" the Ebola epidemic gripping West Africa, but made no new cash pledges, aside from welcoming a IMF initiative to deliver 240 million euros ($300 million) to fight the hemorrhaging disease.

G20 opens in Brisbane under cloud of Ukraine crisis

Heads of the world's leading economies have begun a two-day summit in Brisbane, Australia. Global security looks likely to feature largely on the agenda amid international condemnation of Russia's actions in Ukraine. (15.11.2014)