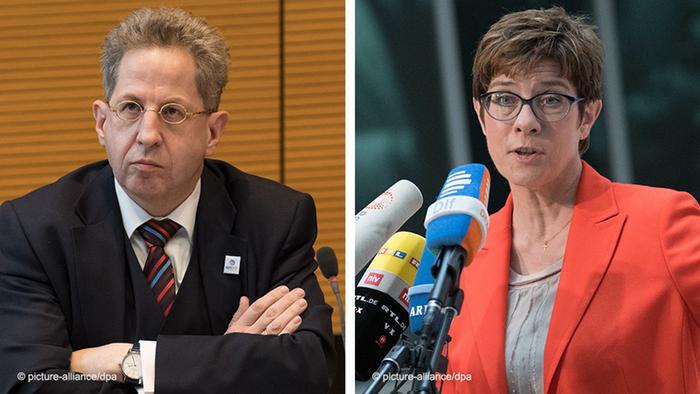 The woman widely tipped to replace Angela Merkel as German chancellor has backed away from an earlier suggestion that the ruling Christian Democrats (CDU) should expel the country's former domestic intelligence chief from the party.

Annegret Kramp-Karrenbauer insisted to the German news agency Deutsche Presse-Agentur (dpa) that she had not called for Hans-Georg Maassen's exclusion.

"Neither in the interview nor elsewhere did I call for a party expulsion procedure," she said, referring to an interview published earlier on Saturday by Germany's Funke newspaper group.

Kramp-Karrenbauer, who took over from Merkel as CDU leader in December, was reacting to criticism of her earlier comments from within the party.

Attempting to play down the controversy, she continued: "The CDU is a party with more than 400,000 members. The fact that each one has a different opinion is what makes us interesting."

Earlier, Kramp-Karrenbauer, who is also defense minister, had at least hinted at possible expulsion when she told a Funke media group reporter: "For good reasons, there are major obstacles to excluding someone from a party, but I do not see any attitude in Mr Maassen that really connects him with the CDU anymore."

Maassen, who belongs to a faction of Germany's conservative alliance that has restrictive views on immigration, was sent into retirement last November by Germany's BfV domestic intelligence service.

He was censured after downplaying video footage showing far-right protesters chasing migrants in Chemnitz in eastern Saxony and spoke of "radical left forces" within the Social Democrats (SPD), Merkel's coalition partner in government.

Responding to Kramp-Karrenbauer's initial remarks, Maassen told dpa: "It is a mystery to me who advised her to conjure up such thoughts."

Regional elections next month in the eastern German states of Saxony and Brandenburg, along with Thuringia in October, could see a further swing to the far-right Alternative for Germany (AfD).

The anti-immigrant AfD has lawmakers in each of the country's 16 state parliaments, as well as 91 seats in the Bundestag, Germany's federal parliament.

Germany's defense minister plans to increase military spending to the NATO target of 2% of gross domestic product. The SPD, Merkel's coalition partners, said they would not allow Trump to dictate military spending. (22.07.2019)