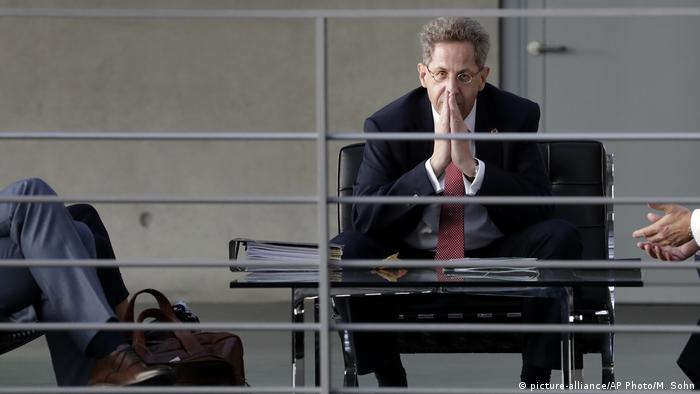 Kramp-Karrenbauer told Germany's Funke Media newspaper group Saturday that as Christian Democrat (CDU) chairperson she would not let her party be undermined as the Tea Party movement had done by "radicalizing" US Republicans.

Her remarks precede regional elections, due in September in Saxony and Brandenburg, and Thuringia in October — three eastern German states where the opposition far-right Alternative for Germany (AfD) is polling strong alongside gains by the Greens in urban hubs — trends that have prompted rethinks about future power-sharing options across Germany's political spectrum.

Read more: German conservatives divided over how to deal with AfD

Maassen, who belongs to the "Values Union" [Werteunion) — an arch-conservative group with restrictive immigration views that was formed in 2017 within Merkel's CDU and sister Bavarian Christian Social Union (CSU) alliance — was sent into retirement last November as head of Germany's BfV domestic intelligence service.

That was after he downplayed video footage showing far-right protesters chasing migrants in Chemnitz in eastern Saxony and referred to "radical left forces" among the Social Democrats (SPD), currently in a federal coalition with Merkel.

Kramp-Karrenbauer, known widely as AKK, who took over from Merkel as CDU chief last December and last month became Defense Minister, told Funke Media: "There's good reason why there's a high hurdle in getting someone excluded from a party. But in Mr Maassen I see no stance which really links him to the CDU."

She also accused Maassen of conducting his politics under the "protective cloak" of the CDU to primarily target perceived opponents within the party's own ranks — a stance she rejected as "unjustified" for a party that sustained a mix of civil-conservative views.

In reaction, Maassen told Germany's DPA news agency Saturday: "It is a mystery to me who advised her to conjure up such thoughts."

Maassen asserted that, under Merkel as former CDU chairperson [from 2000 until 2018], the party had "moved far to the left."

Venting her criticism of Maassen further, Kramp-Karrenbauer, formerly state premier of Saarland — a German region neighboring France — said as a previous Saarland interior minister she was glad that "Mr. Maassen no longer has responsibility for the German Verfassungsschutz [Office for the Protection of the Constitution]."

Since her rise to become CDU leader, Kramp-Karrenbauer's chances of one day succeeding Merkel as chancellor have been queried by Werteunion detractors, who want a party ballot on the next chancellery candidate — ultimately parliament's decision.

Compared to the CDU-CSU alliance of some 550,000 members, the Werteunion has only 2,000 led by regional Heidelberg CDU politician Alexander Mitsch, who recently defied the federal CDU by refusing to rule out future links with the far-right AfD.

Last December, the federal CDU at its party conference rejected outright "coalitions and similar forms of cooperation" with the AfD as well as Germany's opposition ex-communist Left party.

Under its new chief Thomas Haldenwang, the federal BfV domestic intelligence agency based in Cologne recently stepped up checks of neo-Nazi groups, including those suspected of having links extending into the AfD, which has 91 seats in the federal Bundestag.

Scrutiny mounted in June after the murder of Walter Lübcke, a regional government official and longtime CDU member, allegedly by a right-wing extremist.

Does the anti-immigrant Alternative for Germany (AfD) party have any alternatives for the country?