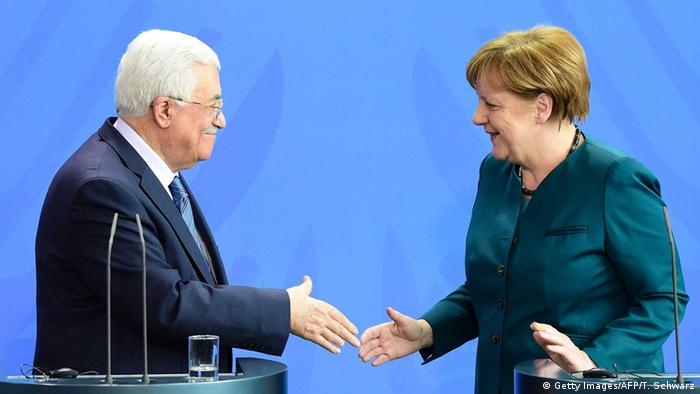 Palestinian President Mahmoud Abbas and German Chancellor Angela Merkel both expressed concerns over the stalemate in the Middle East peace process during a meeting in Berlin on Tuesday.

"I am critical of the settlement policy," Merkel said during a joint press conference with Abbas, calling the settlements "counterproductive" in efforts to create a two-party state solution in the Israeli-Palestinian conflict.

The Chancellor urged the parties to adhere to the two-state solution, "even though it is very difficult."

The 81-year-old Abbas also met with German President Joachim Gauck and Foreign Minister Frank-Walter Steinmeier as part of his international tour to secure support for a United Nations vote to officially condemn the settlement policy.

At the press conference with Merkel, Abbas said he was pushing for the UN resolution "in the hope that it can convince (Israeli) Prime Minister Netanyahu to end the policy and to pave the way for a two-state solution."

"We don't have any other way," the Palestinian president added.

However, Merkel stopped short of lending Germany's support to the proposed UN resolution. She was also cautious about a proposal from France to host an international Middle East peace conference in the upcoming months - a proposal met with reticence by the Israelis.

"Of course it must be a broad initiative including the participation of all the major players," said Merkel.

Merkel also condemned Monday's bus attack in Jerusalem that wounded at least 21 people as "cowardly," saying that "there is no justification for violence."

Abbas said his administration also rejected violence against civilians, saying that Palestinians "want to achieve an end to the occupation and the building of settlements through diplomatic means, and through peaceful resistance by the Palestinian people."

A prior US-brokered peace process between Israel and Palestine collapsed in 2014.