In front of a trip to Washington, German Chancellor Angela Merkel said in an interview published on Wednesday she wants to see "ever-closer economic cooperation" between the European Union and the United States. 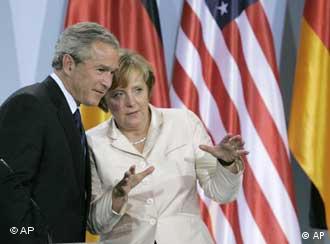 Chancellor Merkel has made a strong transatlantic relationship a priority

Merkel singled out financial market regulations and intellectual property law as two fields which she wanted to review, saying that there were "clear advantages" for both sides in coming together.

She will visit Washington on Jan. 4 for talks with US President George W. Bush that are expected to touch upon the Middle East, Afghanistan, Iraq, Iran and Kosovo.

The relationship between Germany and the United States hit a low when Merkel's predecessor, Gerhard Schröder, strongly opposed the US-led invasion of Iraq in 2003. But since Merkel's time in office, transatlantic ties have warmed considerably.

"We want to talk about ever-closer economic cooperation. Our economic systems are based on the same values," she told the Financial Times newspaper. "We should be looking for ways to keep developing these together at a transatlantic level.

"We must watch out that we do not drift apart but instead come closer together, where there are clear advantages for both sides." 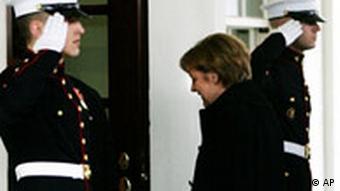 Merkel insisted that countries such as China and Japan should not see the partnership as hostile, adding: "Building bulkheads against Asia would be quite senseless and certainly not in our interest."

Germany's six-month presidency of the European Union began earlier this week and Merkel is also chair of the G8 for 2007.

Questioned about Europe's reliance on Russian energy imports, Merkel warned that relations between the two must be based on reciprocity.

"If obstacles are being erected to protect Russian companies from European investors, nobody should resent it if the Europeans take reciprocal action," she told the paper. 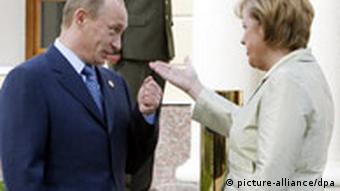 Merkel hasn't been afraid to speak her mind to Putin, diplomatically, of course

On Russian human rights, she said she had repeatedly told President Vladimir Putin that "contrary opinions are a normal part of society", adding that Russia's tough attitude towards non-governmental organisations "gives ground for concern."

Merkel also seemed to baulk at the suggestion by French interior minister Nicolas Sarkozy, an all-but-certain presidential candidate, that the troubled European constitution could be revived as a mini-constitution.

Taking a more optimistic view, she said there was "an entirely new sentiment about the raison d'etre of the EU" and said Germany would not approach the issue "from a minimalist position."

It wasn't what most expected at a meeting of the world's most powerful leaders but a video showing US President Bush giving German Chancellor Merkel an impromptu neck squeeze at the G8 is setting the Internet on fire. (27.07.2006)

US President George W. Bush ended his three-day visit to Germany Friday without the customary visit to the nation's capital, a decision some say will help the trans-Atlantic relationship. (14.07.2006)

DW-WORLD.DE readers commented on the status of US-German ties and the effects of the transatlantic relationship in the rest of the world, especially in the Middle East. (09.05.2006)