Boosting counter-terrorism support for countries in West Africa has become one of Angela Merkel's main priorities on the continent. The chancellor has now pledged millions to improve security in the Sahel region. 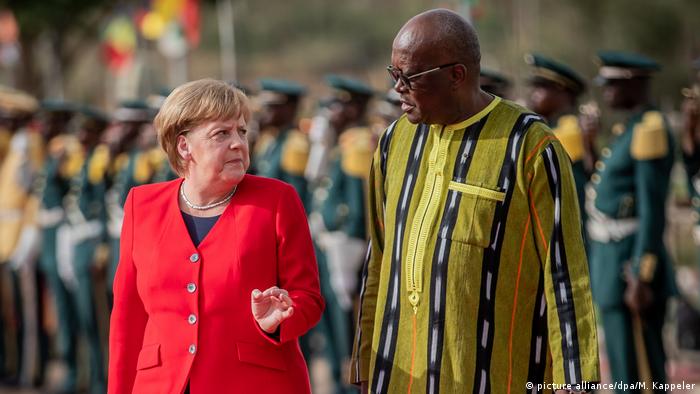 German Chancellor Angela Merkel started her tour of West Africa on Wednesday, a trip that will see her visit Burkina Faso, Mali and Niger for key talks over the next three days.

Berlin also pledged an additional €60 million to the merger of the so-called G5 Sahel countries — which include Burkina Faso, Mali, Niger, Mauritania and Chad.

The chancellor added that the German government has been working to secure investments in the region, to make sure that private-sector investments from German firms were possible.

The bulk of Merkel's visit will focus on security and supporting counter-terrorism efforts in the Sahel region.

Earlier, her spokesman Steffen Seibert said that the region "has become the main focus of Germany's Africa policy" and that Berlin was committed to helping tackling the rising number of terror attacks.

Later on Wednesday, she met with the leaders of the G5 Sahel countries where they were expected to discuss the G5's counter-terrorism forces and how they can work more efficiently in the region.

Although the counter-terrorism force was formed in 2014, it has not yet become fully operational, with observers saying that the 5,000-soldier force still has a lot of work to do to establish itself in the region.

Germany and the European Union have taken in an increased interest in West Africa in recent years, and are pushing to improve the security situation and improve the economic situation in the Sahel region.

Poverty and conflicts in the area have displaced millions of people and are some of the main drivers of migration to Europe.

"If we don't solve the problems in Africa, they will come to us," Development Minister Gerd Müller told the Passauer Neue Presse newspaper on Wednesday.

He praised Merkel's West Africa trip as "a clear signal that we won't forget the poorest of the poor and that we stand by their side."

On Thursday, she will travel to Mali to meet with around 850 German soldiers who are stationed in the northern part of the country as part of a United Nations peacekeeping mission and an EU training mission.

The German military's mission in Mali is the second-largest foreign mission and is regarded as the most dangerous.

During her stop in Mali, Merkel will also attend a discussion with university students.

Merkel will also visit the site where a women's shelter is being constructed in Niger on Friday before heading back to Germany.