The EU should tackle the migrant issue together and fight its root causes, German Chancellor Angela Merkel has said. The chancellor defended the proposed migrant deal with Turkey before the German parliament. 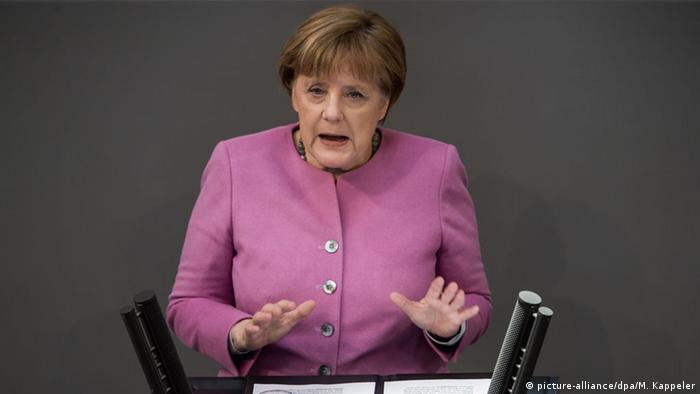 The German head of government commented on the recent drop in migrant arrivals, caused by the closure of borders along the Balkan route. The move has benefited Germany, Merkel said while addressing the country's lawmakers on Wednesday.

At the same time, she warned the nation against being "too relieved."

"We should not be overly relieved because the relief is only one side of the story," she added, pointing to the refugees stuck on their journey to Western Europe.

"The refugee crisis, both for Germany and EU as a whole, is the greatest challenge in a decade," she said.

Instead of closing borders between European countries, Merkel called for the EU and Berlin to fight the "root causes of the people leaving their homes," and protect the EU's outside border with Turkey.

"Turkey is by far the most important transit country," she told lawmakers, while presenting the recent proposal from Ankara on dealing with migrants.

The deal would include returning of illegal migrants to Turkey, and distributing Syrian nationals from Turkey to Europe. In return for its cooperation, Ankara requested an additional financial aid of 3 billion euro ($3.32 billion) and progress on visa-free travel for Turkish citizens in Europe.

Many European leaders criticized the initiative saying that Turkey was using refugees as leverage to pressure EU into giving concessions.

On Wednesday, Merkel said that there will be "no compromise on our principles" in dealing with Turkey, and that conditions for visa-free travel remain the same as before the refugee crisis.

Turkey "couldn't be honored enough" for its taking in 2.7 million refugees, the chancellor said, adding that Ankara's desire for additional funds was "understandable."

EU leaders are due to meet with Turkish officials later in the week in Brussels.

The chancellor urged Athens to continue its work on providing shelters and hotpots in Greece.

"It's important that Greece lives up to its own obligations," Merkel said. "We are helping Greece, both financially and on the ground."

Merkel also urged the EU to reform the Dublin system, which provides rules for asylum in EU countries.

"We need to know how it can be adapted to the changed reality," she said.

"The way we handle the issue will influence Germany and Europe in the long run," she said in her speech.

Turkey has taken back dozens of people deemed economic migrants who had traveled to Greece. Further along the Balkan route, migrants and refugees remain stranded as transit countries have closed their borders. (10.03.2016)