As the EU continues to feel intense migratory pressure from political upheaval in Arab countries, the chancellor says Germany will accept only those asylums seekers who face political persecution at home. 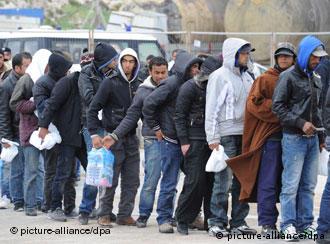 Asylum seekers have mainly been arriving to Italy by sea

Chancellor Angela Merkel defended a government policy to deport economic migrants from North Africa in a speech at this year's Protestant Church Day in Dresden. 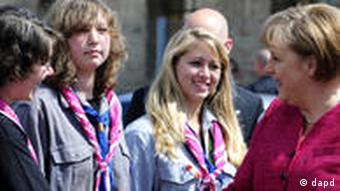 Merkel was speaking at this year's Protestant Church Day

Addressing the audience at the gathering on Saturday, June 4, Merkel said that on humanitarian grounds Germany would accept refugees arriving from countries where there was evidence of political persecution - such as Syria, Lebanon and Yemen.

However, the chancellor said the country had no responsibility for those arriving from countries such as Tunisia - where a ruling dictatorship had been toppled.

"That cannot be the way," she said.

Tens of thousands of migrants from North Africa have sought to enter the EU following a wave of popular uprisings in Arab countries that has already toppled two long-term leaders. Many of them are economic migrants who do not qualify to stay in the EU.

Merkel stressed that all EU countries had to share equally the responsibility of taking in qualified asylum seekers. According to the chancellor, Germany had accepted some 50,000 asylum seekers in the past year, while Italy welcomed only 6,000 in the same period. 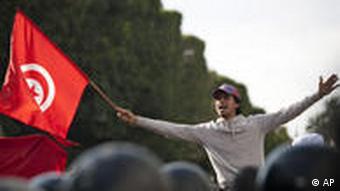 "We have fulfilled our duty, other EU countries must do the same," Merkel said.

Italy has been under fire recently for issuing permits to North African migrants to travel to other EU states, the move being widely seen as an attempt to move refugees on to other countries.

Italy has complained that the EU has not given it sufficient support to deal with an influx of refugees mainly arriving via the Italian island of Lampedusa, just 120 kilometers (75 miles) from the Tunisian mainland. The exodus grew amid the chaos that followed the toppling of Tunisian leader Zine el Abidine Ben Ali in January.

In her Dresden speech, the chancellor also hit out at discrimination against Christians around the world.

Merkel said it was unacceptable that people should be disadvantaged and persecuted for their belief. She stressed the need for states to observe the UN Charter on Human Rights.

"As Christians, we extend the hand of friendship to all other religions, for a dialogue with them," Merkel said. "However, we also expect that what is taken for granted for us at home should also be the case for all other Christians in all the countries of the world."

In addition, the chancellor called on the UN to put stronger emphasis on environmental protection by creating an independent body of similar status to the World Health Organization to take responsibility for green issues.

German officials have raised the possibility of reinstating border controls after Italy said it would provide thousands of Tunisian refugees with temporary travel visas allowing them to enter many European countries. (10.04.2011)

Italian Prime Minister Silvio Berlusconi has held talks with the Tunisian government on repatriating thousands of migrants who have fled to Italy. Meanwhile, vessels of migrants have continued to arrive in Italy. (04.04.2011)