German carmakers risk falling behind when it comes to electric vehicle technology, chancellor candidate Martin Schulz has warned. The SPD leader said carmakers they can no longer afford to be "arrogant." 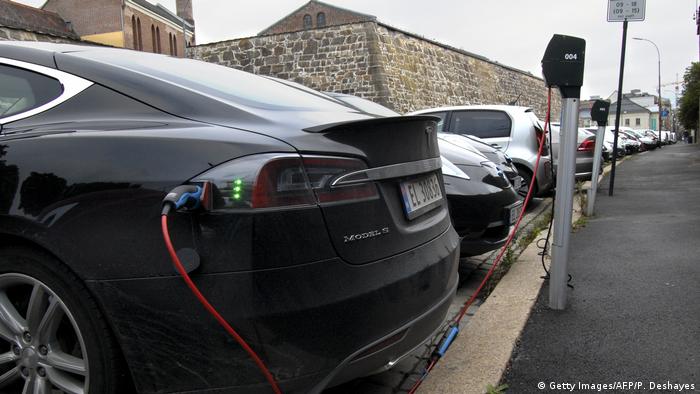 Top of the agenda is a quota on electric cars, not just in Germany, but across the whole of Europe. Such a measure is necessary, Schulz said, to advance the technology and secure the industry's future.

The SPD chief, who will face-off against Chancellor Angela Merkel in next month's federal elections, unveiled the plan in Friday's edition of the German "Süddeutsche Zeitung" daily.

"When it comes to electric vehicles, the German car industry clearly has to improve," Schulz said in his program. US carmaker Tesla, a pioneer in electric cars, had "been mocked for too long" and German carmakers could no longer afford display their current level of "arrogance."

Schulz also stressed the need for greater investment in the production of battery cells in Germany, and not to rely on foreign manufacturers.

Carmakers and Germany's Ministry of Transport should each conduct independent tests over the next six months to determine how diesel cars, including older models, could be upgraded to become more environmentally friendly.

The SPD candidate's proposals came as the Germany's largest carmaker, Volkswagen, was still reeling from the Dieselgate affair. Over the last two years, further scandals have come to light. Last month, it emerged that Germany's three largest car manufacturers, Volkswagen, BMW and Daimler, had allegedly colluded since the 1990s in an attempt to fix prices to stay ahead of foreign rivals.

During last week's Diesel summit in Berlin, carmakers agreed to install software updates in about five million vehicles to reduce the level of harmful emissions. However, Schulz attacked the resolution, dismissing it as a measure to appease carmakers.

Schulz, a former President of the European Parliament, called for a second summit in the autumn and warned that if the latest round of software updates proved to be insufficient, carmakers would would face paying out of their own pockets to provide the necessary technical upgrades.