The German parliament has opened debate on whether to re-establish formal debt negotiations with Greece. Chancellor Merkel was expected to win the backing of the Bundestag - despite several dozen rebels in her own party. 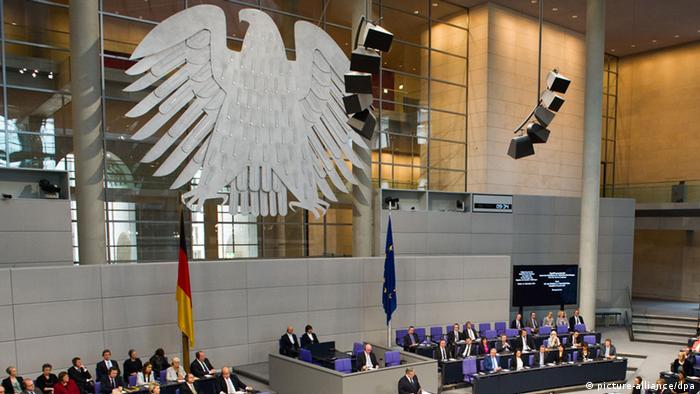 Germany's lower house of parliament, the Bundestag, convened for a special session on Friday to debate the latest proposed bailout for cash-strapped Greece, to the tune of 86 billion euros ($94 billion), a large proportion of which will be underwritten by Germany as Europe's largest economy.

Although Chancellor Angela Merkel, not unlike Greek Prime Minister Alexis Tsipras, faced some stark disagreement from within her own party - most notably Finance Minister Wolfgang Schäuble, who on Thursday defended his suggestion of a short-term Greek exit from the eurozone - it was largely expected that parliament would back the chancellor's position.

On the eve of the debate, Merkel told members of her conservative Christian Democratic Union (CDU) that she was "absolutely convinced" that a third bailout for Greece was the best way forward. Around four dozen members of the CDU indicated their intention to vote against the package. However, there are 255 CDU politicians in the 631-seat Bundestag. Even Schäuble has urged party members to vote 'Yes.' 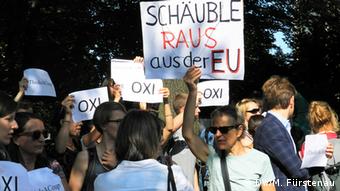 Very little resistance to the measure is expected from other parties - the bill should pass with numerical ease, but only after a terse and tense debate.

Even the opposition Left party supported the rescue package, though they disagree that further austerity is necessary - in an interview with German broadcaster Phoenix ahead of the debate, Left deputy chairwoman Sahra Wagenknecht conceded that "yes…earlier governments in Greece were corrupt, but you can't strangulate an entire country."

Merkel has critique for Tsipras, praise for Schäuble

In her opening speech ahead of the debate, Merkel recalled the election of Tsipras and his Syriza party in January on a wave of support after promising to end painful austerity measures forced upon Greece by creditors. Chancellor Merkel has taken a lot of criticism in recent weeks for appearing too hard on Greece, and responsible for the continuation of austerity as a strategy to reduce Greece's debt.

"A country cannot, through a new election, change European contracts. We are a community based on law," the chancellor told the Bundestag. 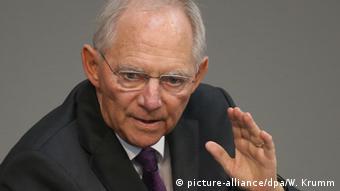 Merkel said it was up to them to make sure "chaos and violence" did not return to Europe. No one can decide "against Greece," she explained, but only "with Greece," as it was a matter of "European solidarity". She made it clear that the type of "time-out" suggested by Schäuble was not on the table.

Merkel criticized the Tsipras administration for not taking enough of its own responsibility for Greece's problems, though she was careful to point out that it was not the current government that landed Athens in this situation. She called on her fellow parliamentarians to vote 'Yes' so that Germany could help Greece "come out stronger than it went in" to the eurozone crisis, and thanked Finance Minister Schäuble for his hard work in recent months to help negotiate a deal between Greece and the 18 other Eurogroup countries.

Gregor Gysi, leader of the Left party, on the other hand, had very different words for Schäuble - opening his comments with the accusation that the finance minister "wants to destroy the idea of Europe," and that while he supported help for Greece, he found the current political attitude towards their fellow EU member "undemocratic and anti-social."

Germany's vice chancellor and economy minister, Sigmar Gabriel of the Social Democrats (SPD), spoke directly after Gysi - taking the lefist to task for becoming too "ideological" in a debate about concrete issues, and calling upon his colleagues to display "humanity" and vote 'Yes.'

He said that the negotiations over Greece's debt had exposed "weaknesses in the architecture of Europe," but they could be easily overcome by international cooperation. Gabriel reminded his colleagues that Greece was a small problem for the EU when one considered the threat posed by terrorists and the difficulty in handling the mass wave of refugees coming ashore in Europe after fleeing conflict in the Middle East and Africa.

Germany is one of several eurozone countries who must sign off on the emergency fund. Friday's vote was not a final decision on whether or not to approve the bailout, but rather to resume official talks after the last rescue program expired at the end of June, ushering in two weeks of financial chaos and confusion in Greece.