Merkel calls for a sustainable solution to Europe′s problems | Germany | News and in-depth reporting from Berlin and beyond | DW | 15.12.2011

Merkel calls for a sustainable solution to Europe's problems

German Chancellor Angela Merkel has given a speech to the German parliament explaining the decisions taken at last weekend's EU summit. She sees Germany taking a leadership role in resolving the bloc's debt crisis. 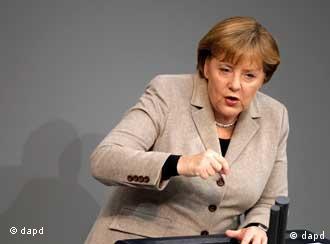 "It is the historic task of today's generation of politicians to create a lastingly stable Europe."

It was with these resounding words that Chancellor Angela Merkel concluded her government statement to the German parliament, the Bundestag, on Wednesday.

Merkel said that the decisions taken at last weekend's European Union summit had paved the way for a political plan of action. "We are no longer just talking about a fiscal union," Merkel said, "we have started creating one."

These decisions are to be turned into treaties and enter into force by March 2012. This would put into action what had been learnt from the errors made when constructing the EU, the chancellor said.

Stronger because of the crisis?

Merkel repeated her political objective of having Europe emerge from the crisis stronger than before.

The fact that she sees herself and Germany taking a leadership role in this recovery became evident as she evaluated the cost-cutting efforts made by various eurozone countries such as Ireland, Italy and Spain. 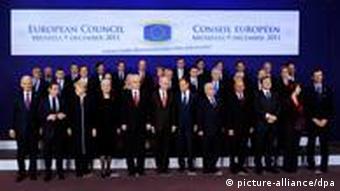 "Those who confront their own responsibilities and do their homework can expect solidarity," she said.

She admitted, however, that much was being demanded of citizens across Europe and that this should be duly recognized.

The chancellor listed five points in the new framework for concerted solidarity.

Firstly, the effectiveness of the bailout fund used up to now, the European Financial Stability Facility (ESFS), is to be increased.

Secondly, the new bailout fund, the European Stability Mechanism (ESM), is to be implemented more quickly than originally planned, with capital being paid into it as early as 2012 - with that capital coming from all states and not just those with so-called "triple A" status.

In addition, the IMF will receive another 200 billion euros to enable it to play a greater part in rescue operations in the future.

Greece, with its participation of the private sector, was a special case, Merkel said. In the future, she said, bailouts would function as they do with the IMF, without private participation.

And a majority of 85 per cent will in future be enough for quick assistance from the ESM to be granted - only fundamental decisions will need to be unanimous.

Merkel went on to say that "individual responsibility" and "solidarity" were two of the three pillars underpinning the new fiscal union.

She stressed once again that the present crisis was a sovereign debt crisis. However, she warned, this crisis had now also become a crisis of confidence.

For this reason, she said, there was now a third pillar in the fiscal union, which is intended to make provision for the future and create long-term confidence: states are to establish clear rules on debt - and enshrine them in their constitutions if at all possible. If the rules are not kept, penalties could be imposed and enforced by the European Court of Justice.

"We are now paying the bill for past mistakes; eurobonds would be another mistake," Merkel said amid loud protests from the chamber. Merkel argued that such bonds would not address the root of the problem. 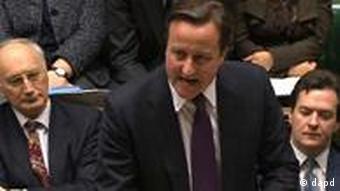 Cameron decided to go it alone

She said Britain will remain an important member of the European Union despite refusing to join the new treaty aimed at solving the problems that led to the eurozone debt crisis.

She told Bundestag members that, while she regrets the decision, "It is beyond doubt for me that Great Britain will in future continue to be an important partner in the European Union."

She added, "Great Britain is a reliable partner for Europe not just in questions of foreign and security policy; Great Britain is also this partner in many other questions: in competitiveness, in the internal market, for trade, for climate protection."

Merkel also used her speech to reaffirm her commitment to fighting to save the euro currency, saying that "the euro is symbolic of the depth of Europe's unity." She said that resolution could turn things for the better and that she hoped that the new feeling of community would remain.

But elsewhere in her speech, Merkel did not sound so resolute. She warned that the way out of the crisis would take years and that there would be setbacks that should not, however, be allowed to lead to discouragement.

"There is no simple and fast solution; no single quick fix," Merkel said, defending her much-criticized approach to overcoming the crisis.

The leader of the opposition Social Democrats, Frank-Walter Steinmeier, is one of the critics.

"These are not the right steps," Steinmeier said.

The alleged breakthrough, he said, was not a breakthrough at all - and he questioned where such a breakthrough could be leading anyway, in view of the fact that the recent decisions had not been able to calm markets down.

Merkel and Sarkozy call for immediate action in eurozone crisis

Ahead of Thursday's EU summit, Germany and France have urged EU partners to take immediate action to contain the region's debt crisis amid signs of divisions over the measures needed. (08.12.2011)

Opinion: Caught between a rock and a hard place

The special relationship between the US and the UK has taken a serious knock as a result of Britain's maneuvers at the recent EU summit. Deutsche Welle's Rob Mudge argues that the US will look for new alliances. (13.12.2011)

Merkel sees Europe on the way to political union