The leaders of France, Germany, Spain and Italy have urged a reform of the EU to allow member states to choose their degree of integration. The EU is searching for a way forward as the UK prepares to trigger its exit.

The concept of "multispeed Europe" would see some EU countries grow more united on economic and defense matters while allowing other states to catch up later, the leaders of four of the EU's biggest economies said at an informal summit on Monday. The meet was hosted by French President Francois Hollande, who welcomed Germany's Angela Merkel, Italy's Paolo Gentiloni and Spain's Mariano Rajoy in Versailles.

"Unity is not uniformity," Hollande said at a joint press conference, urging "new forms of cooperation."

One of the priorities, according to the French president, is the creation of a European defense force to cooperate with NATO. Also, some EU states could move faster and further in deepening the eurozone and harmonizing their fiscal and social policy.

His comments were echoed by Angela Merkel, the leader of Europe's largest economy. 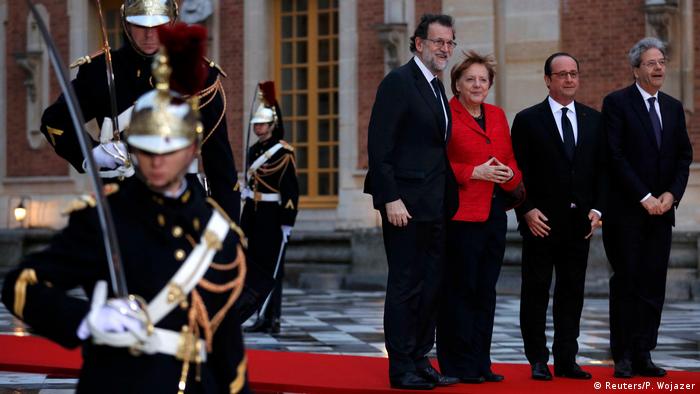 "A multispeed Europe is necessary; otherwise we are blocked," she said. "We must have the courage to accept that some countries can move forward a little more quickly than others."

The four leaders presented no detailed proposal after Monday's summit. However, the EU is expected to weigh its options for the future in the run-up to the Rome conference on March 25. The meet, marking 60 years since the EU was founded, would see the 27 remaining countries discuss reform proposals. The UK expects to launch exit negotiations by the end of the month.

The idea of varying degrees of unity between EU nations has been endorsed by Spain and Italy, as well as several other rich EU nations. Newer members, particularly Poland and Hungary, signaled their reservations.

Last week, European Commission President Jean-Claude Juncker set out five possible directions for the EU, ranging from reducing the EU to a single market to maintaining the status quo, reducing Brussels' influence, going down a more federalist path, or creating the multispeed EU endorsed by the major players of the bloc.

At the time, Juncker said that the Brexit would be painful, but would "not stop the EU as it moves to the future."

Coronavirus: UK approves Pfizer-BioNTech vaccine, to roll out next week 4h ago