The European Union will create a joint command center, which will at first focus on its army training operations in Africa. Eastern European countries have voiced concern the move could undermine NATO cooperation. 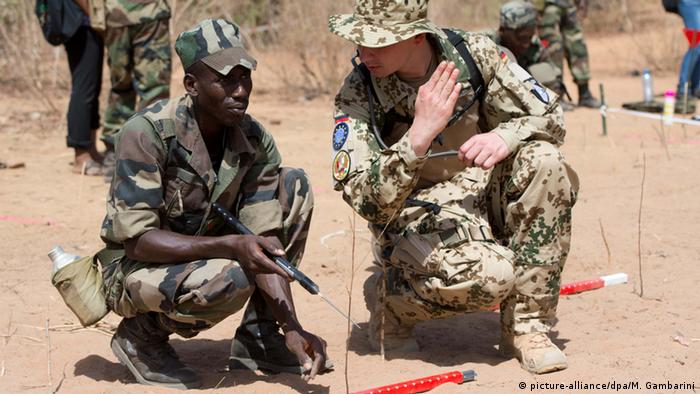 The European Union approved a controversial new headquarters for joint military operations abroad on Monday. Some member states have been highly skeptical of the plan, saying it undermines the importance of NATO in defense cooperation.

"Today we decided to establish a MPCC (Military Planning Conduct and Capability facility) which will command the EU's non-executive military missions," Mogherini told the press.

The initial responsibilities of the facility will be to orchestrate military training missions in Somalia, Mali and the Central African Republic. Mogherini stressed that they will not involve the use of force except in cases of self-defense.

"This is one of the fields where traditionally we have had in the history of the European Union more divisiveness - since the fifties we were struggling in the defense field," she added, saying she felt a "certain pride" that the bloc was finally able to come together on the matter.

"It is not a European army," she was at pains to make clear.

Soon-to-exit Britain had long opposed increased military cooperation, but with the bloc now losing one its most powerfully armed members, the time might seem ripe to shore up a united defense policy.

Some eastern European countries have also repeatedly voiced their concerns. Particularly, that the move could be seen as a threat to the more powerful NATO, which they view as necessary to their own security amidst increasingly tense relations with Russia.

Mogherini stressed, however, that NATO would always remain Europe's top defense partnership. The new facility is set to have a small staff of only about 30 people and will have to answer to the EU's existing military organizations.

It’s the Bundeswehr’s most difficult and dangerous overseas deployment. Soon it will also be the biggest. The German parliament has agreed to send more soldiers to Mali - but troops alone cannot resolve the crisis. (29.01.2017)

Germany's defense minister has called on the Bundestag to approve an increased military deployment to Mali. She warned, however, that it would be the most dangerous international mission for German troops. (20.01.2017)