Angela Merkel is increasingly being depicted as a Nazi in other EU countries - as a new Hitler. Does that mean that Europe's political culture has failed? 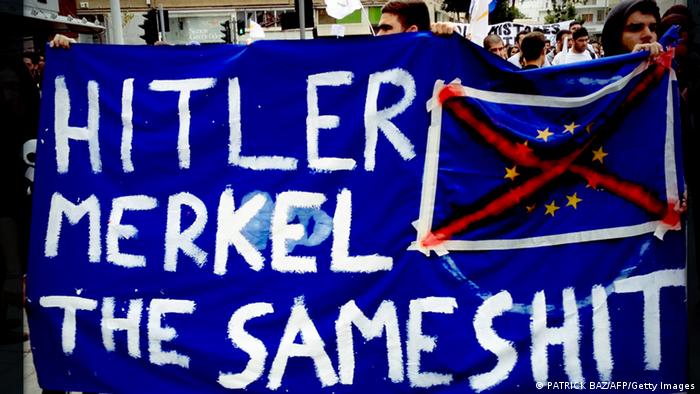 It all began in Greece. About three years ago, angry Athenians took to the streets in protest, and one of their banners showed German Chancellor Angela Merkel in an SS uniform. Since then, there has been no end to the Nazi comparisons. Merkel's strict austerity measures in the euro crisis cemented Germany's power in Europe in the eyes of many protesters, reminding them of the occupation during the Second World War.

At that time, hundreds of thousands of Greeks were murdered by Germans. In 1944, Wehrmacht soldiers raped the women and girls in the village of Distomo and shot the entire population who remained. Nearly seventy years later, many Greeks see themselves as victims once again: the suicide rate in the country has increased by a third, and not even half the young people have a job. Large parts of the population look on impotently as the crisis takes away any chance of a livelihood for them. Is it any wonder that, alongside the protesters, the Greek media have taken to making savage attacks against the Germans? TV shows with polemic about Nazis are currently enjoying top ratings. 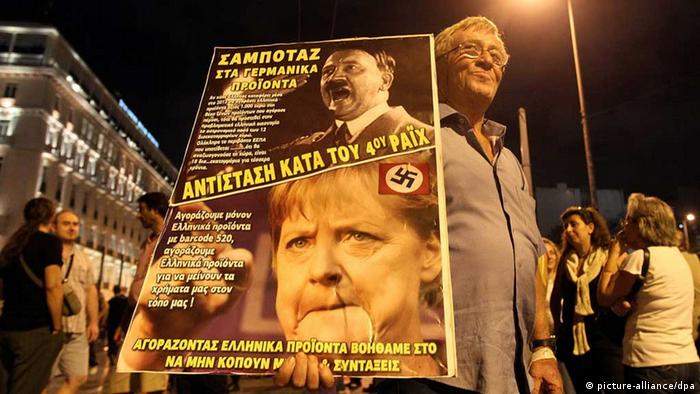 Other European countries have also dusted off their Nazi imagery since the crisis has made itself ever more strongly felt - such as Cyprus, which was spared from German occupation. When small savers began to fear that even they would have to pay for the bank bailout, angry protesters wore Merkel masks with Hitler mustaches. Their banners read, "Nazi Germany still alive." And in Spain, an economics professor recently wrote in the country's largest daily newspaper that Merkel had, "like Hitler, declared war on the rest of Europe, this time to secure [the Germans] economic space." Even though the editors later withdrew the article, it shows that the climate is poisoned.

It matters little that the Nazi allegations are historically untenable. The former European parliamentarian Olaf Schwencke who is President of the German Association of the European Cultural Foundation (ECF) describes such comparisons as "Totally inappropriate, but to some extent psychologically understandable." He says these events trigger the collective memory of those nations that were invaded by the Nazis: "And then, if a new challenge appears, the response is disproportionate."

The end of political culture?

But he's also critical of the way Germany has handled the situation: "It should have been made clear in recent months that the act of providing aid is a part of European solidarity and not, say, the act of someone who knows everything better." The attitude of "we're doing it right, do it like us," was the wrong one. 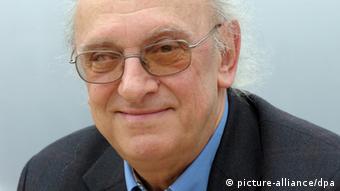 According to the Greek writer Petros Markaris, "The Germans are seen as a schoolmaster, and not only in Greece." But, writing in a German newspaper, he was also not short of criticism for his own country: "Almost all Balkan peoples see themselves as innocent victims," while the Germans "are proud of their accomplishments and want the rest of the Europeans, especially the Southerners, to imitate them." But here they failed to recognize "that the South has a very different culture."

Germany seems to be culturally shortsighted - and it too likes to see itself as a victim: as paymaster of the European Union which "pays the Greeks their luxury pensions" as the mass-circulation Bild newspaper put it.

"This victim image is very self-righteous," Ulrike Guérot, head of the Berlin office of the European Council on Foreign Relations, says. "But nowhere do you find any willingness to admit any element of German responsibility for the situation." Arrogant slogans like "Europe speaks German" are equally dangerous. That was said by CDU parliamentary group leader Volker Kauder in 2011, and it has not been forgotten - on the contrary.

So is there any evidence of a respectful, sensitive approach towards each other? Not much! "This shows how fragile the cultural veneer is that we have built in 50 years of integration," says Guérot. She thinks that the dimension of the crisis was so unprecedented that it had laid waste the effects of Germany's attempts over the years to use international cultural activities to create a new image of itself: "It's not just a euro crisis or excessive indebtedness of the South. It is a capitalism crisis, a banking crisis, a sovereignty crisis and a systemic crisis."

It is thus a highly complex situation that lacks a debate about the cultural aspects: "When things are too complex, the easy answers win out," says Guérot. "In Germany, people responded to the complex crisis with 'lazy Greeks.' In a similar simplification, the Germans are now getting that back with 'Merkel is Hitler.'" That means translators are needed - "translators in the cultural sense: people who understand what is going on in Italy or just why the French feel they are being steamrollered by the 'modèle Allemand' [the 'German model']." 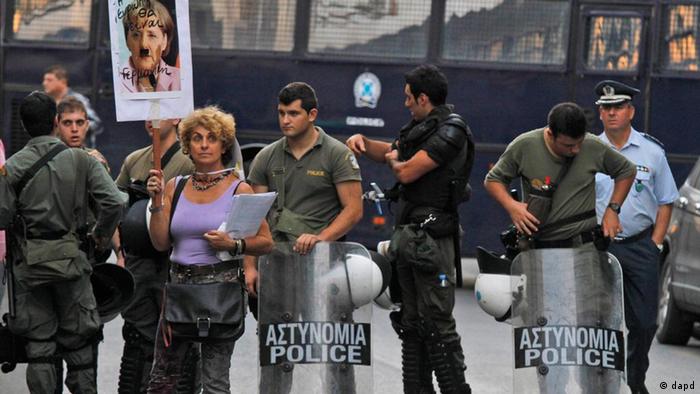 Protests against Germany belie the complexity of the issues

So is it just a communication problem? No according to Schwenke: "It's also a fairly serious political issue. It was predictable that there would be aggression against Germans and that these Nazi comparisons would emerge. If we had thought about it in good time, we could have developed a conflict program working at the cultural level." For example, the German foreign ministry could have made funds available to the German international cultural Goethe-Institut.

"Europe has invested heavily in the economy, but too little in culture and shared values," Markaris wrote in early 2012. "It would be very helpful to both sides, if the Greeks allowed a bit of common sense to flow to their feelings and the Germans a bit of compassion to their rationality."

Guérot comes to a similar conclusion: "All sides would have to take a step back," she said. "Of course the Cypriots had a chaotic business model, but we closed our eyes and made money out of it. Of course the French have to undertake structural reforms, but the French are also right when they say that Germany is guilty of undercutting France on workers' social protection. That is, everyone has a flaw." Instead of pointing fingers at others, she said, they should try cultural discourse. "That would be worthy of Europe."

Polish opposition leader Jaroslaw Kaczynski is playing with the primal fears and cultural resentment of his countrymen toward Germans and Russians for his own political gain - and not without success. (15.12.2012)

As Italy gears up for general elections on Sunday, Silvio Berlusconi is trying to win over voters with anti-German campaign rhetoric. Berlin has responded with cool restraint. (22.02.2013)