Angela Merkel intends to push trade talks between the EU and Mercosur nations. The chancellor has met with Uruguay's president to forge new bonds in the wake of Donald Trump's inauguration in the United States. 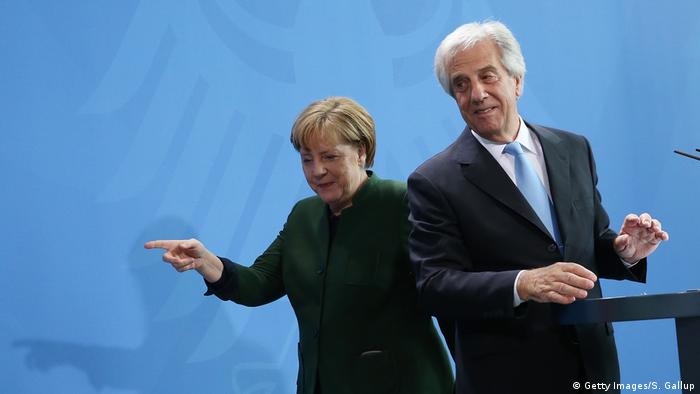 On Wednesday, Chancellor Angela Merkel said new right-wing administrations in Latin America had improved the chances of an EU trade pact with  Mercosur, the region's primary trading bloc. The German chancellor's search for new trade partners has grown increasingly urgent for EU businesses after the election of US President Donald Trump cast doubt on the future of bilateral trade ties with the United States.

"We, as the European Union, if we perhaps don't advance or advance more slowly with a view to the United States - we will have to see - of course will continue to negotiate other trade agreements quickly," Merkel, who is facing an increasingly tough re-election fight, said on Wednesday. "We are negotiating with Japan, with India, with Australia, and we are negotiating with Mercosur."

Trump has said he will not allow the United States to sign on to the controversial Transatlantic Trade and Investment Partnership during his presidency.

"Before anything, we need to know what the agreement will be with the new US administration," Merkel said on Wednesday. "The topic of free trade will be important at the G20 meeting. We will see then what the priorities of the US administration are."

Founded in 1991, Mercosur entered into its first trade negotiations with the European Union in 1999. The bloc's members are Uruguay, Paraguay, Argentina and Brazil, after Venezuela was suspended in December. Merkel said Uruguay could prove a "motor" toward bringing negotiations to a beneficial end in Brussels.

President Tabare Vazquez seeks to firm overseas bonds as Uruguay's neighbors experience economic hardships. He is headed for Finland next, and his trip will wrap up in Russia. But there may be a good reason why his first stop was Berlin.

"Germany is a fundamental member of the European Union," Vazquez said. "We have committed to keep pressing the negotiations to reach an agreement between Mercosur and the EU."

The president pointed out that Uruguay "has historically advocated for the demolition of barriers and the elimination of obstacles to commerce."

Vazquez also criticized Trump, especially his ban on refugees and travelers and immigrants from seven mostly Muslim countries. He said Uruguay had been built by immigrants from Europe in the 18th and 19th centuries. The indigenous population was largely wiped out by disease and colonialist slaughter by the end of the 1830s.

"We do not agree with making walls," Vazquez said on Wednesday. "We want to build bridges between nations. We do not believe that nations should discriminate on ethnic or religious grounds or on the basis of sexual preference." He added: "We believe in the peaceful search for solutions. Because of this, some of the actions of the president of the United States concern us. "