McDonald's is changing its look in Germany. The classic yellow-on-red design of its famed "golden arches" is being changed to yellow-on-green, in a move that aims to signal the chain's eco-friendly attitude. 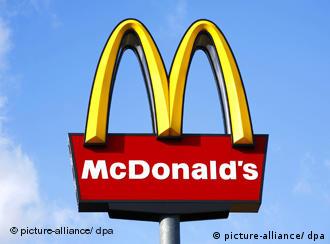 Changing a well-known icon is a bold move

Even in Europe, McDonald's has been an icon almost as long as it's been a fast-food chain. Now, part of its well-known image - the famed M-shaped "golden arches" against a red background - is getting a makeover.

The move is part of a larger image upgrade that the burger franchise has undergone across much of Europe. And the altered logo is just one of the company's successful strategy changes in Germany, which also involves expanding its coffee-bar business. 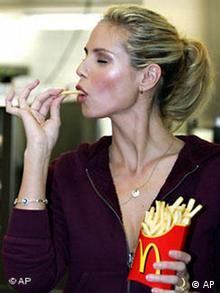 The first McDonald's restaurants to "go green" will be those that newly built, including a 1.4 million euro ($2.1 million) "flagship" restaurant in the Munich airport.

Germany on the cutting edge

"Now that the interiors of most restaurants have been modernized and redesigned, its time to take on the exteriors, with green instead of red," said Holger Beek, vice president of McDonald's Germany, in an interview with the Financial Times Deutschland.

The color was chosen because it invokes respect for the environment, he said.

McDonald's' German unit is considered to be on the cutting edge in terms of design and product selection for the chain. The first McDonald's coffee bar was tested in Australia in 1993, and now, nearly half of all the McDonald's in Germany - 612 out of 1,350 - have an integrated McCafe. 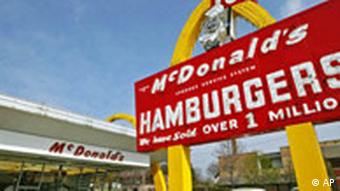 Red-and-yellow from the get-go, the sign is an icon

The McCafe coffee bars, with their sleek leather-look seating, warm niche lighting and free WiFi, are a modern departure from the restaurant's old Formica tabletops, molded-plastic chairs and fluorescent lights.

Meanwhile, earlier this month, a McDonalds in New York's trendy Chelsea neighborhood made news after it adopted what is being called a "European" look. The franchise's owner admitted to taking his design cues from some McDonald's restaurants in Europe.

The menu is the same as in other US McDonald's, but the ultra-modern Chelsea shop looks less like a fast-food joint than a hipster cafe, with laptop outlets, flat-screen TVs, upholstered vinyl chairs, and a lounge area. The employees' uniforms are all black.

A US spokeswoman for McDonald's, Danya Proud, told NBC news that while thousands of the chain's 14,000 restaurants have been updated over the last few years, the Chelsea location is the first "urban redesign" in the US. 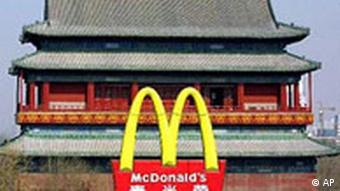 The logo is recognized around the world

"We'll continue to evaluate" whether more might follow, she said. She added that redesigned European restaurants - along with menu items geared toward the customer base in different countries - have been responsible for McDonald's growth in Europe.

In Germany, growth despite recession

In Germany, McDonalds opened 42 new restaurants in 2009, and in 2010 plans to open 40 more, company VP Beeck said. German McDonald's managed to grow in 2009 despite the international economic crisis, he added.

As part of its plan to boost its share of the German coffee-bar market, the company will open its first free-standing McCafe in Germany in 2010. Currently the cafes are integrated into the regular burger fast-food restaurants.

McDonald's will pull out of Iceland because it is too expensive for the franchise to operate in the wake of the country's financial crisis. (27.10.2009)

Geneva is to become the European center of the Golden Arches - a move the company says is to coordinate senior management. But an expert critic says tax loopholes are the real reason for what's becoming a Swiss exodus. (14.07.2009)

More than 60 world leaders will attend the World Summit on Food Security organized by the UN Food and Agriculture Organization this week. But the leaders of most of the world's leading economies won't be there. (16.11.2009)