After eight years as mayor of Estorf, a town of just under 1,700 people in Lower Saxony, the Social Democrat Arnd Focke had had enough. On December 31, 2019, the 48-year-old resigned. "It was a painful decision," he said, "but the right one."

Focke has been involved in helping displaced people for a long time, and he was a regular target of verbal attacks from nationalists. He received threatening phone calls at night. "I thought I was prepared for this," he said.

Swastikas were smeared onto Focke's private car. He found slips of paper in his letterbox: "We'll gas you like the Antifa."

"That was too much," Focke said. "It got too personal and too direct."

Read more: To be or not to be German enough

There have been cases of violence against regional German politicians in the past.

When she was running for mayor of Cologne, Germany's fourth-largest city, in 2015, Henriette Reker sustained serious neck injuries after being attacked on the street by a man with a 40-centimeter (16-inch) hunting knife. Reker won the election while in the intensive care unit of a hospital. In court, the perpetrator said he had wanted to take a stand against Reker's support for Germany's asylum policy. A few months earlier, Chancellor Angela Merkel had decided to keep the borders open when news came that thousands of displaced people planned to apply for asylum in Germany.

About 75 kilometers (45 miles) northeast of Cologne in 2017, Altena Mayor Andreas Hollstein was stabbed in the neck by a 56-year-old man with a 30-centimeter knife. The assailant is reported to have complained about Hollstein's asylum policies during the attack.

In 2019, Walter Lübcke, the president of the administrative district of Kassel, was assassinated in front of his house, shot in the head at close range. The prime suspect, Stephan E., said he had been motivated by Lübcke's campaigning against racism and Islamophobia. The suspect retracted his confession. The trial is ongoing. 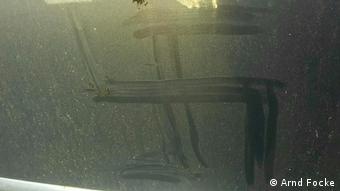 A swastika was smeared onto Focke's car

A mayor in the Rhineland has applied for a firearms license for what he says is self-defense after struggling with nationalists in his community. And a mayor in the state of Saxony resigned in November following continued threats from nationalists.

The German Association of Towns and Municipalities (DStGB) has interviewed more than 1,000 mayors and found that one in four of those questioned had at some point been insulted or threatened. "Unfortunately," DStGB chair Gerd Landsberg said at the beginning of 2020, "the threat situation has not improved." Landsberg said Germany's 16 states had appointed contact people for mayors to report threats to. He said the DStGB woul seek to make the stalking of politicians to a crime.

Read more: Ferguson prompts Germany to reflect on its own police force

The mainstreaming of nationalist politics, most visible in the Alternative for Germany (AfD) party, has become a means of spreading ideas once considered taboo, Focke said. But, he said, it would be too simple to blame the AfD for the threat to centrist regional German politicians.

"The problem is right at the heart of our society," Focke said. "We no longer stand up for each other or against extremism. People are able once again to say things they weren't even allowed to think five years ago."

"We failed to educate," Focke said. "Children and young people must be taught that we in Germany have a past that cannot be allowed to repeat itself. And there are many people who are discontented and are too easily manipulated to this end."

Focke is now trusting federal investigators to look into the swastikas and the threatening notes. He believes that other politicians have also resigned because of threats — they just don't say so publicly.