Sinti and Roma lead difficult lives in Germany | Germany| News and in-depth reporting from Berlin and beyond | DW | 08.04.2012

Many still refer to them as 'gypsies,' and they have to battle discrimination and stigmatization in their home country. Most Germans hardly know anything about one of the largest ethnic minority groups in the country. 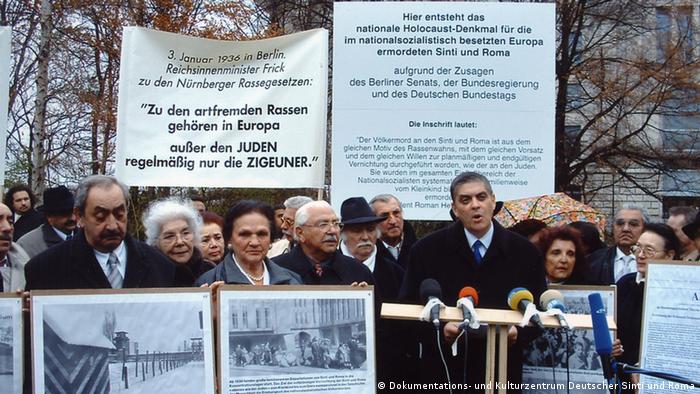 Sinti and Roma are one of the four officially recognized ethnic minority groups in Germany - the others being the Danes, the Sorbs, and the Frisians. They have their own culture and language protected under a Council of Europe framework agreement of the since 1995.

There are an estimated 120,000 Sinti and Roma in Germany, with some 70,000 of them having the German passport. This makes them the largest ethnic minority group in the country.

Discriminated and persecuted for centuries

Sinti and Roma are originally from Northwest-India. Some 600 to 800 years ago, they migrated to Europe in groups. The Sinti, a sub-group of the Romanis, came to German-speaking regions, to what is today Germany, Austria and Switzerland. The groups who moved to eastern and southeastern Europe call themselves Romani and came to Germany about a hundred years ago.

For centuries, Sinti and Roma were victims of persecution, which culminated under Nazi rule, when more than 500,000 people were killed in concentration camps. And Sinti and Roma often face discrimination and racism today.

Common stereotypes include the perception that Sinti and Roma live in caravans and move from town to town as a "travelling people." The reality is quite different, however, with the majority leading a normal life with a permanent place of residence and normal jobs.

Many Romani have no right to stay 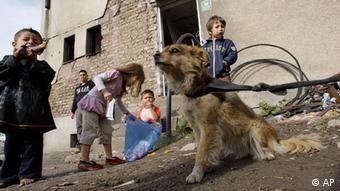 Sinti and Roma children in Sarajevo

In the 1990s, civil war in the former Yugoslavia caused some 50,000 Romani to seek refuge in Germany, among them 20,000 children. Many are still in refugee camps where living conditions are very basic, and they're constantly threatened with deportation. Often, their official status doesn't go beyond being merely 'tolerated' (geduldet), which means they are not allowed to work or attend language classes and integration courses.

The young generation's situation is particularly explosive. Absenteeism from school is high among teenagers, and many leave school without a qualification. The German Council of Sinti and Roma has been drawing attention to the alarmingly low level of education and has been calling for a national action plan to improve education among Sinti and Roma.

Holidays and traditions based on Christian beliefs

Ninety percent of Sinti and Roma in Germany are Catholic. Many take part in pilgrimages regularly, with the most popular route being to Saint Sarah in the coastal town of Saintes-Maries-de-la-Mer in southern France. Thousands travel there every year to pay homage to the patron saint of French and Spanish Romani. 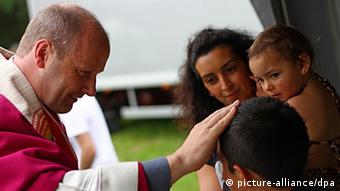 Many Sinti make a pilgrimage to Germershausen

In Germany, hundreds of Sinti make a pilgrimage to Germershausen every year in July. This is a town in the state of Lower Saxony, where, according to an age-old story, a shepherd is said to have seen an effigy of the Holy Virgin with the baby Jesus inside a hollow willow tree. Pilgrimages are often a popular occasion for christenings.

In early May, Muslim and Christian Orthodox Romani from the Balkans celebrate Herdelezi, Saint George's Day. This is an interreligious spring festival that goes on for several days, marking the beginning of summer. People dance and make music, and ask for happiness and wealth, which is mirrored in the decoration that consists of symbols for life and spring, such as candles, branches and "healing spring water."

A new Berlin exhibition featuring the work of Roma and Sinti artists aims to raise awareness about a segregated people, who continue to face discrimination. "Reconsidering Roma" runs until December 11. (28.11.2011)

Life on Society's Margins - Bulgarians and Romanians in Germany # 10.06.2011 # People and Politics