Mayor calls for homeless to be detained as cold hits Brussels

The mayor of a Brussels neighborhood has said homeless people sleeping in parts of the city will be detained overnight if they refuse shelter. Brussels' 3,000 homeless face expected subfreezing temperatures this week. 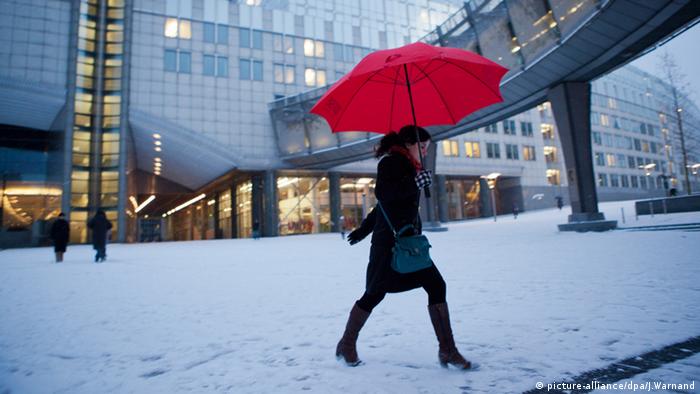 The mayors of two central Brussels districts on Monday directed Belgian police to force all homeless people into public shelters, even if they were unwilling to go.

"The cold is a major risk," said Vincent De Wolf, mayor of the Brussels district of Etterbeek, stressing that it was his responsibility to avoid potential deaths.

Snow and cold weather have disrupted travel in the neighboring Netherlands, where the chill has been labelled "the Siberian bear" and where a low of minus 17 celsius (1.4 degrees fahrenheit) is expected on Thursday.

'In case of absolute necessity'
Across Europe, the cold spell has also caused havoc.

"As a consequence, the mayor of Etterbeek has authorized, in case of absolute necessity, the detention of homeless people who are acting in a way that would endanger their safety by refusing shelter," Etterbeek council said in a statement.

Campaign groups estimate that over 3,000 homeless people live in the Brussels region.

Etterbeek, which houses the main offices of the European Union, was followed by Brussels City, another of the 19 councils that make up the greater Brussels region. Its mayor said he had given similar orders to police and asked them to prioritize children sleeping outside.

Meanwhile, due to growing concerns of subfreezing temperatures, Berlin authorities have increased the number of overnight accommodations for the homeless.

Berlin's Social Integration Senator Elke Breitenbach of the Left Party told InfoRadio that it will be a "big challenge" for authorities, but for now, an additional 100 beds have been added to a hangar of the former Tempelhof Airport.

An arctic cold front has swept across Europe, driving temperatures down. In Rome, it meant snowfall for the first time in years.

Three-Star Accommodation for the Homeless

Three-Star accommodation for the homeless