A rare snowfall has paralyzed Italy's capital, forcing authorities to shut schools and send in the army to help clear the streets. The Colosseum, the Roman Forum and other major tourist sites were closed to visitors.

Residents of Rome awoke on Monday to find the city transformed into a winter wonderland after its heaviest snowfall in six years.

The Italian capital usually experiences mild winters thanks to its Mediterranean climate. But an Arctic storm passing over much of Europe dumped enough snow to shut down schools and severely disrupt public transport.

Italy's civil protection agency announced it had decided to dispatch the army to clear snow-clogged streets, adding that volunteers would be sent to help commuters stranded at train stations.

One runway was open at Rome's main Fiumicino Airport, while its second hub at Ciampino was closed overnight due to the snow. Ryanair said it had canceled all flights to and from the airport.

A number of major tourist sites were also shut, including the Colosseum, the Roman Forum and the Palatine Hill. 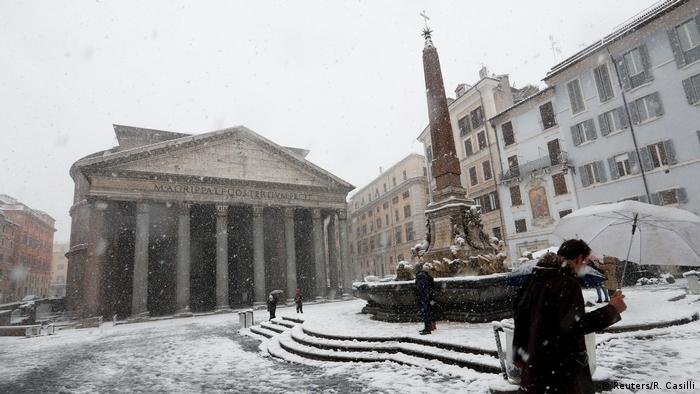 People walk past the Pantheon in downtown Rome during a snowstorm

Many Romans came out to enjoy the unusual conditions, taking photographs of snow-dusted streets, staging snowball fights and sledding down slopes.

About 3-4 centimeters (1.2-1.6 inches) of snow settled in Rome overnight. Although it's not much, the dusting was the city's first real snowfall since February 2012. No more snow is forecast, but temperatures are expected to hover around zero degrees Celsius (32 degrees Fahrenheit) until Wednesday.

The storm also brought snow to several other cities in central and northern Italy, causing school closures and severe disruptions to public transport.

Flooding, snowfall and high winds have swept across the UK and continental Europe. Airport cancellations and power outages have resulted from the wintry conditions. (13.01.2017)

Sub-freezing weather in the US is reported to have caused several deaths, with another icy blast set to hit the northeast of the country. Many cities have experienced record low temperatures over the past few days. (02.01.2018)

After glorious sunshine and mild temperatures just a week ago, parts of Germany are gripped by cold and covered in snow once again. The Easter holiday period even proved colder than Christmas. (18.04.2017)