Freezing rain and heavy snow have killed one person in Moscow and downed over 2,000 trees. Over half a meter of snow blanketed the Russian capital by Monday morning in what was already dubbed a "snowfall of the century."

Moscow authorities said coming to school was "optional" on Monday as the Russian capital was bracing for more snow and icy weather following the record-breaking snowfall. Some 25 incoming flights were redirected to other Russian cities and over 100 delayed following the weekend storm, which tested even the limits of the famously icy metropolis. 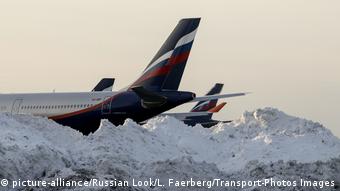 Snow delayed flights on Moscow airports, including the busy Shermetyevo

Freezing rain accompanied by 43 centimeters (17 inches) of snow blanketed the capital within 24 hours. It was the heaviest day of snowfall to hit the Russian capital since the country's weather records began, Russia's meteorological service said. By Monday morning, the blanket of snow thickened to 55 centimeters.

Officials urged Moscow drivers not to take their cars on the streets, in order to ease the job for snow-cleaning crews.

"We had what was already dubbed a 'snowfall of the century,'" he told the press. "Still, there was no collapse or a disaster," he added.

Previously, Sobyanin said that one person was killed and five injured due to snow and dangerous conditions.

"One person died from a falling tree that hit an electric power line," Sobyanin posted on his VKontakte social media page. He warned that strong winds were still to come.

At least 2,000 trees around the city collapsed due to the snow, officials added.

The severe weather also caused massive power outages in hundreds of towns around Moscow, although the power supply was restored by Monday.

Snow cleaning crews were doing double their normal runs through the city, as temperatures were expected to dip to -17 degrees Celsius (+1.4 Fahrenheit) on Monday night.

"In addition to that, there will be more snow," deputy mayor Pyotr Biryukov, told the press. "In the next three days, we will have 6 to 8 centimeters of snow on the Moscow streets."

The weekend snowfall topped the previous record values from 1957 and 2013.

One day before the big military parade in Moscow, it is raining. Meteorologists have also predicted snow and rain for Tuesday. Nonetheless, the sun is likely to shine. How is that possible? (08.05.2017)

Before blowing up on social media, the term "bomb cyclone" was used mostly by meteorologists or weather enthusiasts. But what makes this type of winter storm so "explosive" besides the name? DW explains. (04.01.2018)

Rail and air traffic in Germany have slowly resumed after a winter storm with hurricane-force winds slammed into western Europe. Several people were killed by falling trees and dangerous road conditions due to the storm. (19.01.2018)

A winter trip to Moscow