A fire set off an explosion that has killed six, injured dozens and released a huge plume of toxic smoke. The blast set off a huge shock wave and blasted windows out of buildings miles away. 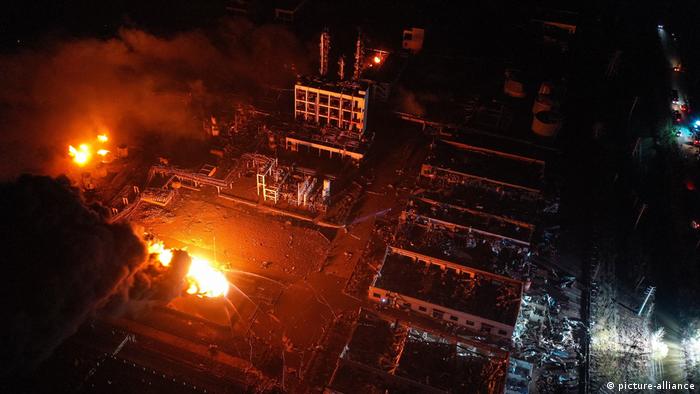 A chemical plant in the eastern Chinese city of Yancheng was the site of a massive explosion on Thursday. At least six people were killed and dozens injured when the blast destroyed a number of buildings at the chemical facility. It is feared that more workers may be trapped in the rubble of collapsed buildings.

The explosion also knocked down neighboring buildings, blasted windows out of schools and residences miles away and sent an enormous plume of toxic black smoke into the sky. China's earthquake administration said that it registered tremors measuring a magnitude of 2.2 in the nearby city of Lianyungang.

Multiple fires and a toxic plume

Some 400 firefighters and emergency workers arrived at the scene to fight multiple fires. The blast is said to have been triggered by a fire at a fertilizer plant at the facility.

Though it is reported that toxic fumes were belching from the site, causing the evacuation of nearby residents, authorities from Yancheng's environmental office said strong winds had helped to quickly dissipate them. The agency warned, however, that toxicity remained high.

A string of deadly industrial accidents

Thursday's blast is just the latest in an ongoing series of major industrial accidents in China. Last November, an explosion at a plastics plant in Zhangjiakou, which will host the 2022 Winter Olympics, killed 24 and injured 21.