Blasts at a Chinese chemical warehouse left over one hundred people dead and injured hundreds of others. Sodium cyanide had been stored at the site. If it's released, the consequences would be severe. 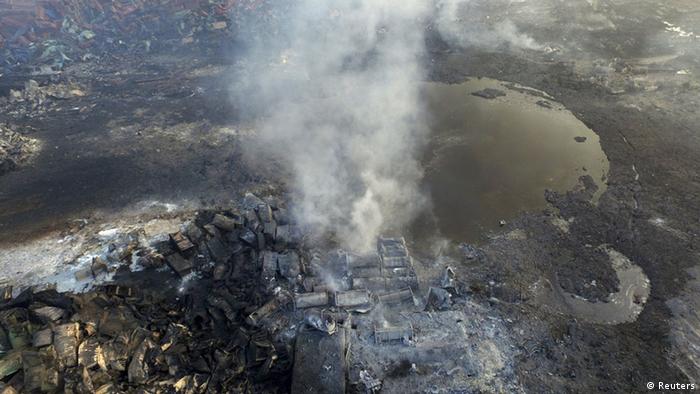 Tianjin's deputy mayor, He Shushan, confirmed there was about 700 tons of the deadly chemical stored at the warehouse that blew up. According to the South China Morning Post, that is much more than the warehouse operator had licenced for storage.

Chief engineer at Tianjin's bureau of environmental protection, Bao Jingling, was quoted by Chinese media saying that around 700 tons of the hazardous chemical had been found intact. Some containers, though, were leaking. He added that no unsafe levels of harmful gases were detected on site.

That would mean that no - or only a negligible amount - had been released into the environment.

If sodium cyanide were released and even reached the ground water, the consequences would be dramatic. It is classified as "highly toxic" and dangerous for the environment.

A deadly love for metals

Sodium cyanide is a white solid. When swallowed, it is lethal for humans, killing within minutes of consumption.

The toxic part of the compound is the cyanide ion. It binds to iron which is part of the enzyme cytochrome c oxidase. This enzyme is essential for cellular respiration, to convert oxygen and nutrients from food to intracellular energy.

If the enzyme is blocked by cyanide, humans die of inner suffocation. Sodium cyanide is also poisonous for most animals.

What makes sodium cyanide even more dangerous: The chemical reacts with acids and even with water to form the deadly gas hydrogen cyanide. You don't even have to swallow it - simple inhalation of hydrogen cyanide is fatal.

Hydrogen cyanide smells of bitter almonds. However, not all humans are able to detect the odor.

The chemical industry produced almost 800,000 tons of sodium cyanide in 2012, according to a UK market research company.

It is an important chemical to extract gold and other precious metals in the mining industry. Cyanide binds to these precious metals, forming a very stable and water-soluble compound. This way, gold can be attained from even low-grade ore.

Sodium cyanide is also indispensable in chemical synthesis. It is needed to produce a range of pharmaceuticals, dyes and polymers.

To detoxify it, you just have to add hydrogen peroxide. According to chief engineer Bao Jingling, this is already being done at the Tianjin site for those containers that were leaking. The others were transported away.

Authorities also said they had sealed all waterways leading into the sea from the blast site so that no sodium cyanide could reach the water.

According to Chinese media, the warehouse in Tianjin also stored other dangerous chemicals including ammonium nitrate, potassium nitrate, and calcium carbide.

Ammonium nitrate is a white, water-soluble solid. It is mainly used as a fertilizer but can also used for explosives. Heating or any ignition may cause the chemical to combust and even explode.

Potassium nitrate is part of salpeter and has many uses, including fertilization and food preservation. It is also one of the major constituents of gunpowder as it decomposes at several hundred degrees Celsius.

Calcium carbide is more or less the storage form of the welding gas acetylene. The solid reacts with water to yield acetylene and calcium hydroxide.

Whereas the production of calcium carbide is declining in most parts of the world, it is increasing in China. Here it is used as a raw material for the chemical industry, in particular for the production of the polymer polyvinyl chloride.