Mass graves and destruction in Bucha and Hostomel | Europe | News and current affairs from around the continent | DW | 13.04.2022

Mass graves and destruction in Bucha and Hostomel

Now that Russian troops have withdrawn, Kyiv's suburbs are being cleared of mines – and bodies are being exhumed. DW's Alexander Savitsky reports from Hostomel and Bucha, where journalists have been granted access again. 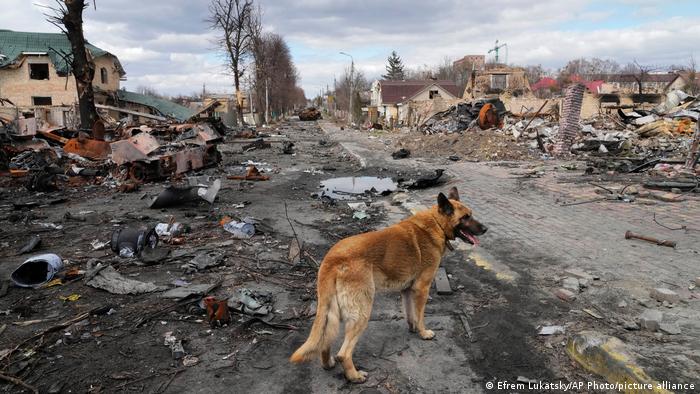 Kyiv's northwestern suburbs of Bucha and Hostomel are in ruins

It is an eerie scene. Hostomel was one of a group of pleasant suburbs on the northwestern edge of Kyiv. Now, following the withdrawal of Russian troops, its streets are empty. The first blossom is on the trees, spring birdsong is in the air – but there is also the creaking of broken metal lampposts, and the barking of stray dogs that have lost their owners. The asphalt is strewn with fallen electricity pylons and decimated fences. With every step, broken glass crunches underfoot.

There are burnt-out houses, garages, and cars everywhere. Many of the buildings are five-story apartment blocks – the majority now have no roof. Shooting and shock waves have shattered the windows. On one of the remaining balconies, some laundry flutters in the wind, abandoned in the panic of the Russian invasion. In all the time we – a group of journalists – are in Hostomel, the only other people we see are one man and one woman, middle-aged, who turn toward the press buses with hope in their eyes. 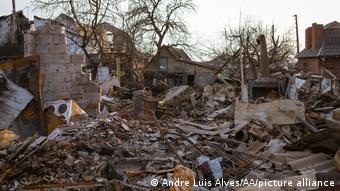 Hostomel airport, around 20 kilometers (12 miles) from Kyiv, was the main hub of Antonov Airlines. It is known for its cargo planes, which include the biggest aircraft in the world: the Antonov An-225 "Mriya" – "Dream." The road to the airport has been badly damaged by shelling. A billboard with a portrait of the aircraft designer Oleh Antonov, after whom the cargo and passenger plane manufacturing company is named, remains undamaged. There is a great deal of burned-out Russian military equipment scattered about the airfield. Shells have gouged craters in the earth. After days of bombardment, the doors, walls and roofs of the hangars are riddled with holes.

All that remains of the only An-225 "Mriya" are its nose cone and wings, with the remains of the six engines. The enormous aircraft's burnt-out interior is visible through a gaping hole in the middle. We journalists are allowed to take photos of the uncanny sight, but we can't get too close to the debris, as the airfield is still littered with heavy machine gun cartridges and unexploded ordnance. "The experts will only be able to inspect the plane and establish the cause of the fire once the area has been cleared," says Ukraine's minister of internal affairs, Denys Monastyrskiy, who is accompanying us. After fierce battles at the airport of Hostomel, Ukrainian forces managed to recapture it

Monastyrskiy says the Russian invaders occupied the airfield on the very first day of the assault on Kyiv, February 24. Dozens of Russian helicopter gunships flew in very low over the Kyiv reservoir, so as to be invisible to radar. The first 500 Russian paratroopers then landed in Hostomel. "The Ukrainian defenders succeeded in shooting down six enemy helicopters in an extremely brutal battle," the minister says. He tells us that hundreds of paratroopers were killed, and the Ukrainian military, using rocket launchers, also wiped out one of Chechen leader Ramzan Kadyrov's elite units with all its equipment.

Monastyrskiy says the Russians subsequently sent such massive reinforcements that they were able to take the airport and the town. The intention, the minister says, was for Hostomel to serve as a landing place for Russian forces that would conquer and occupy Kyiv. However, the Ukrainians had blown up the runway, and eventually, after more fierce battles, they forced the invaders to retreat. "But Kyiv is not out of danger," Monastyrskiy says. "We are preparing for the possibility of fresh attacks." Bucha: Bodies must be identified

Hostomel and Bucha are directly adjacent: Only a town park marks the administrative boundary between the two. But the difference now is astonishing. Just one week after Bucha was liberated from Russian occupation, there is life in the town again. We see people and civilian cars; more houses here are intact than in Hostomel. Here too, though, damaged buildings, wrecked supermarkets, and roadblocks are reminders of the recent battles.

And the peaceful impression is deceptive. The images of bodies on the streets of Bucha are still fresh in the mind, not only for the town's inhabitants but for people all over the world. Even as municipal services are busy clearing the streets, graves are also being dug up, providing more and more evidence of the murder of civilians.

The press bus stops at an Orthodox church. Beside it, bodies are being exhumed from a deep pit. The workers are wearing white protective suits, while the dead lie in black plastic sacks. The priest says many people from Bucha who had lost contact with members of their family are fearfully watching the opening of the graves. "They're hoping that they won't find their relatives among the dead. They're hoping that perhaps they've been taken prisoner, or are in hospital, but have at least survived." The body bags are open, the faces of the dead visible; by now, though, most of them have turned black. 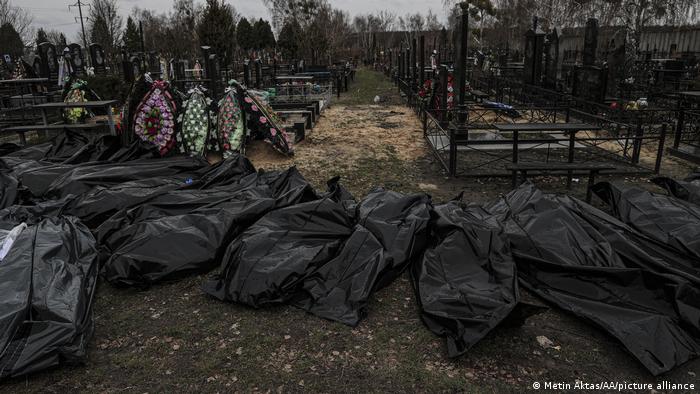 The dead are being exhumed from mass graves to identify them

Andriy Nebytov from the National Police, Kyiv region, tells the reporters that, so far, 40 people have been found in the grave beside the church. A municipal employee got permission from the Russian occupiers to collect the bodies from the streets of the town. "We are now handing over the corpses to forensic experts," Nebytov says. "Many have bullet wounds to the head or on their bodies. We can say that they were targeted and shot with machine guns or sniper rifles."

The police chief says that, with the exception of two military personnel, the dead are male and female civilians of different ages. "In addition to these 40 bodies, more than 400 from the entire Kyiv region have been taken to forensic institutions," says Nebytov. "More than 360 of these are from Bucha, Hostomel and Irpin." And the search is not over yet: "Many people were buried in gardens, because they couldn't be taken to the graveyards during the shelling," he explains.

This article has been translated from Ukrainian.