At Bayer's annual general meeting in Bonn, environmentalists and politicians voiced discontent over the proposed takeover. Both companies have come under fire for substandard ethical and environmental practices.

At today's annual general meeting of pharmaceutical company Bayer in Bonn, environmental organizations, politicians from the Greens and concerned citizens were all steadfast in their shared goal: the Bayer-Monsanto merger must be stopped.

Bayer's intention to take over the United States-based seeds and agrochemicals company for just under 59 billion euros ($64 billion) was met with widespread anger due to Monsanto's poor environmental record and the possibility that it may grant it an even broader market for pesticides.

The agriculture minister for the German state of North Rhine-Westphalia, Johannes Remmel, expressed his concerns to DW: "The merger would create a central market position for these two very powerful corporations, pushing smaller farms out of the agricultural sector."

"We cannot allow that."

Axel Köhler-Schnura is a founding member of "Coordination gegen BAYER Gefahren" (CGB), and has been critical of Bayer for a number of years.

"Bayer's public image is better than Monsanto's," he told DW, "But both companies are carved from the same wood - and when two criminals work together, we cannot solve the crime."

So what are these two mega-corporations being accused of exactly? Let's begin with Monsanto, the agrochemical company probably best known for its use of the allegedly cancer-causing chemical glyphosate in its Roundup product, which is among the most widely used herbicides in the world.

Although some studies dispute that the chemical can lead to cancer, many environmentalists claim that Monsanto distorted these results in the product-testing phase, such as exposing lab rats to glyphosate for only a short period of time. Monsanto has been accused of poisoning agricultural fields with harmful chemicals

Nevertheless, thanks to its widespread use in agricultural regions and rural areas, glyphosate residues have already found their way into beer, bread, and even human urine and breast milk.

This has led to a moniker within the agricultural industry: once Monsanto, always Monsanto. Once farmers purchase the Monsanto-patented seed alongside Roundup, they are effectively locked in to a long-term contract, as one product will not work without the other.

In the meantime, the powerful chemicals enter the soil, killing thousands of native insects that were previously essential in the natural food chain.

So how does Bayer fit in with Monsato? The company is also active in the chemical and plant science fields, brandishing the tagline "science for a better life."

Besides being a major producer of the world's aspirin, Bayer is probably best known abroad for a well-publicized scandal concerning some worrying side effects of popular contraceptive pill, Yasmin - or Yaz. 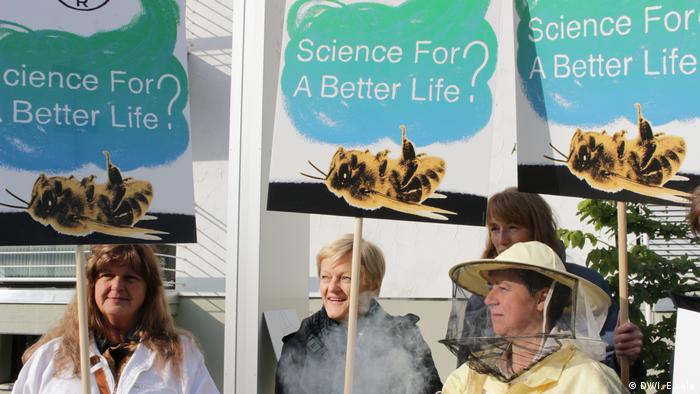 However, the company was in recent times accused of bypassing safety regulations. It is also still haunted by its involvement in the production of poison gas, particularly during the World War II, in which it supplied large quantities of Zyklon B to the Nazi government while it was a part of German chemical industry conglomerate IG Farben.

If the merger does go ahead, it wouldn't be the first time the two corporations have worked together. The Mobay Chemical Corporation was formed back in 1954, which saw Monsanto and Bayer collaborate on the production of the infamous Agent Orange during the Vietnam War.

Agricultural scientist and former Paraguayan minister Miguel Lovera has warned Bayer against getting involved with Monsanto, due its strong presence in the country after the agricultural sector was largely deregulated in 2012.

"Monsanto has taken our land - 95 percent of the agricultural land in Paraguay is now in the hands agribusiness giants," he said.

"Buying Monsanto means death; economically, ethically and morally. Monsanto has done too much harm with its pesticides and genetically modified food."

Vocal protesters gathered on Bonn's United Nations plaza to protest the annual shareholders meeting of the German drugs juggernaut Bayer. The chemical manufacturer hopes to take over the US corporation Monsanto. (28.04.2017)

Corona mutations: Can people who have recovered or been vaccinated be infected again?