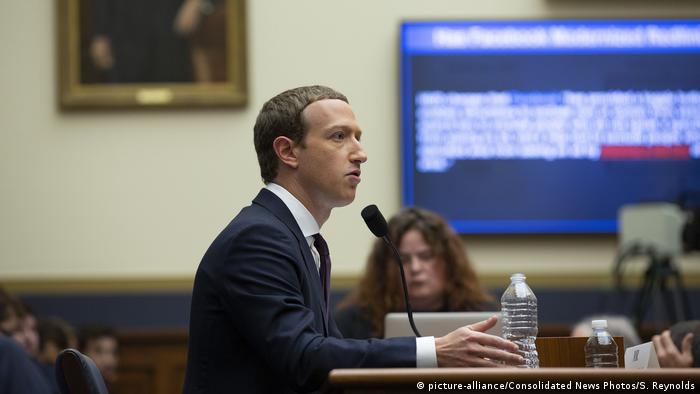 Facebook founder Mark Zuckerberg appeared before the US House of Representatives Financial Services Committee on Wednesday, to face questions on his troubled Libra digital currency project.

Zuckerberg faced a wide variety of questions on election interference, free speech, hate groups and fake news, from members who were critical of the social media company.

His testimony comes just two days after the company disclosed the removal of a network of Russian accounts targeting US voters on its Instagram platform.

The Facebook CEO had last appeared before Congress in April 2018, when he spent 10 hours over the span of two days answering questions from House and Senate panels over political consulting firm Cambridge Analytica's misuse of user data to interfere in the 2016 US election.

Democratic Representative Alexandria Ocasio-Cortez used the opportunity of Wednesday's hearing to ask Zuckerberg when he became aware of Cambridge Analytica. The Facebook founder said he was not sure.

Ocasio-Cortez then grilled him over political ads on Facebook, asking Zuckerberg if his platform would allow ads that deliberately lied to users.

"In a democracy, I believe that people should be able to see for themselves what politicians that they may or may not vote for are saying and judge their character for themselves," Zuckerberg said, adding that the platform did draw the line at content that incites violence or voter suppression.

Facebook's founder faced criticism from both Republicans and Democrats alike, with several congress members saying they did not trust Facebook to provide its users with a cryptocurrency, given its record.

But some Republicans were a bit more sympathetic and argued that the government should not stand in the way of innovation in the private sector.

"I have my own qualms about Facebook and Libra and the shortcomings of Big Tech," said Representative Patrick McHenry, the top Republican on the panel. "But if history has taught us anything, it's better to be on the side of American innovation."

Zuckerberg promised that his company would seek US regulatory approval before launching Libra. The digital currency project has received its fair share of criticism over fears it may enable money laundering and upend the global financial system.

To date, several financial partners including Mastercard, Visa, PayPal and eBay have backed out of the Libra project. But Zuckerberg is moving ahead, partnering with a Switzerland-based consortium, which included venture capital firms and nonprofits, to make it happen.

"Why do a number of these founding members have concerns of whether you're up to the task of meeting our money laundering and regulatory standards?" Republican Representative Ann Wagner asked.

The 35-year old CEO conceded that companies dropped out because Libra is a "risky project" and that ultimately, he was not sure it would even work.

"It would be beneficial for all if Facebook concentrates on addressing its many existing deficiencies and failures before proceeding any further on the Libra project," Democratic Congresswoman Maxine Waters told Zuckerberg.

Majority of US states back antitrust probe against Facebook

The US state of New York launched a probe to determine if Facebook's actions "stifled competition and put users at risk." Some 47 out of the 50 American states have joined against the tech giant. (22.10.2019)

The Interior Ministry joined other allies in calling for dialogue and "back-door access" for law enforcement. Facebook has said that privacy concerns outweigh possible benefits for police. (12.10.2019)