German companies are not doing enough to ensure their foreign partners respect human rights, according to a government survey. The findings come amid renewed calls for a global supply chain law to protect workers. 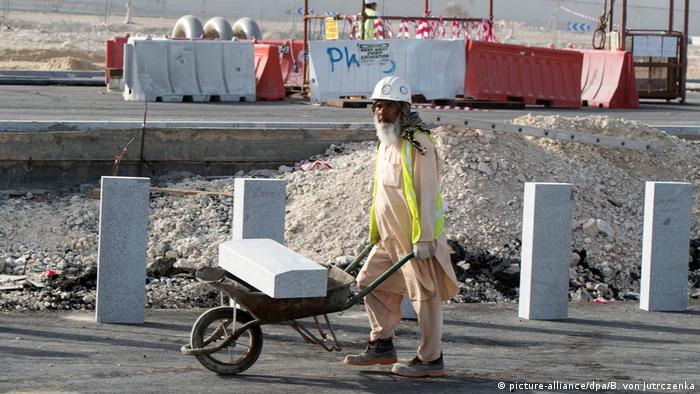 Only 13 to 17% of German companies are doing what is needed to ensure their foreign partners respect human rights, according to the results of a recent survey published by the German Foreign Ministry on Wednesday.

That means "even fewer" firms are meeting requirements set out by the German government than was reported after a preliminary survey conducted last month, a spokesperson for the Development Ministry said in Berlin. The initial survey found 22% of German firms implemented a system to monitor how their foreign-made goods are produced.

Both surveys are part of the 2016 National Action Plan for the Economy and Human Rights, or NAP, which states that if more than half of large German companies are not adhering to human rights guidelines by 2020, then steps including "legal measures" will be considered. The research looks into German companies with more than 500 employees.

Commenting on the first report in July, Foreign Minister Heiko Maas said it showed that "on the one hand many German companies are already intensively dealing with human rights questions in their global business operations and actively tackling problems."

"On the other hand, the preliminary results clearly show that many companies have fallen short of the expectations of the federal government," he added.

According to the latest data, 83 to 88% of firms are not meeting the requirements laid out by the government, the Foreign Ministry said, but 10 to 12% of those firms "are on a good path towards fulfilling the NAP."

The law aims to bring transparency to global supply chains employed by German businesses. The authorities hope to monitor them for human rights violations, including child labor, discrimination and lack of labor rights.

Development Minister Gerd Müller and Labor Minister Hubertus Heil have already said they want to make creating just such a law a top priority during the upcoming legislative period.