Malta allows rescued refugees on German ships into port | Germany | News and in-depth reporting from Berlin and beyond | DW | 09.01.2019

After weeks of waiting, 49 North African refugees on two rescue vessels have received permission to disembark. Germany has agreed to accept 60 refugees in total amidst ongoing political wrangling within the EU. 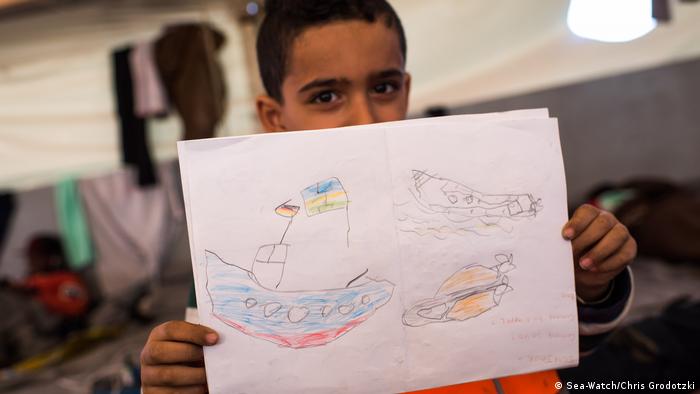 Malta has allowed people on two German NGO rescue ships to enter port after they were stuck in limbo for weeks in the Mediterranean, thus ending an embarrassing political impasse for the EU. The asylum-seekers walked off boats onto Malta on Wednesday.

The Sea-Watch 3 and the Professor Albrecht Penck rescued 49 North Africans in danger of drowning on December 22 and December 29 respectively. But the ships, which sail under German flags, weren't allowed to land as Germany and other EU nations wrangled over where these refugees and 249 others already in Malta would be sent.

"We're absolutely prepared to accept these 50 people and have been for months," German Interior Minister Horst Seehofer told reporters on Tuesday. "But we have set a precondition that a significant number of EU states show joint solidarity."

Specifically, Berlin was insisting that other EU members agreed to take in 249 other refugees already on Malta before it accepted the 49 on the two ships, an Interior Ministry spokesman told DW.

A ministry official confirmed that Germany would take in a total of 60 refugees from both groups.

The NGOs Sea-Watch and Sea-Eye, which operate the two vessels, have been highly critical of the German government and Seehofer in particular for failing to take in the refugees on the ships. On Tuesday, the two groups held a joint press conference at which they described the rapidly deteriorating hygienic and psychological conditions on board the vessels.

"The EU is releasing its 49 hostages," Sea-Watch tweeted after the refugees were allowed on land. "After 19 days at sea, our guests are now in a safe port. It's a sign of government failure — politics should never be pursued at the cost of people in need."

The Interior Ministry spokesman admitted that the compromise concerning the refugees in Malta was an "ad hoc" measure and not an indication that the EU had made progress toward a long-term agreement on how to distribute refugees throughout the bloc. 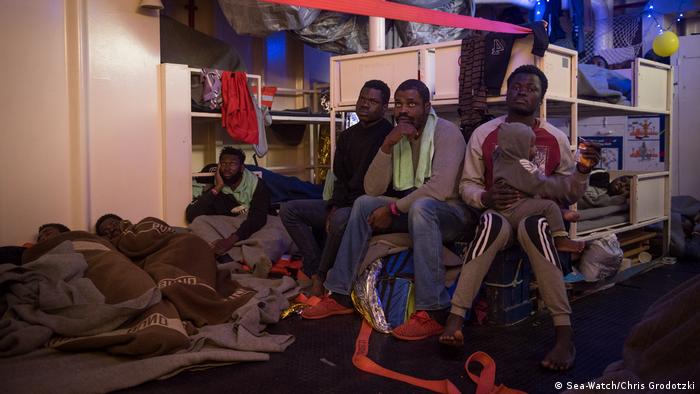 Conditions aboard the vessel for the refugees, some of whom are children, were desperate

Passing the buck between Berlin and Brussels

The term "hostage" may be a somewhat drastic, but there is no denying a certain brinksmanship in German policy at present.

Sea-Watch and Sea-Eye point out that more than 30 communities in Germany, including the cities of Berlin, Bremen and Hamburg, had agreed to take in the refugees on the ships, only to be prevented from doing so. They want Seehofer to use a clause in Germany's residency law to admit people like the ones they rescued into the country.

The Interior Ministry says it only admits asylum-seekers to Germany under the rules of the largely defunct Dublin Regulation. Germany has been trying for months to convince other EU member states to revive the controversial agreement or replace it with a new deal. The Interior Ministry says the responsibility for cases like that of the Malta refugees ultimately rests with Brussels.

The European Commission says that it's up to national governments to reach consensus.

"As the Commission already said in December, we are ready to work with Member States to put in place temporary arrangements, which would serve as a bridge until the new Dublin Regulation becomes applicable," a Commission spokesman told DW. "All agree that the reform is needed: A reformed Dublin Regulation that finds the right balance between responsibility and solidarity is the only structural solution possible in the medium term." The ones who suffer most from the governmental impasse are, of course, refugees who are made to wait on overcrowded ships in the hope that ad hoc deals will allow them to disembark somewhere in the bloc.

Sea-Watch team leader Philipp Hahn described contacting the German Maritime Search and Rescue Association for advice about where to head with the refugees. He was told to hand them back to the Libyan coast guard. In a statement on its website, the association says that the Mediterranean is outside its jurisdiction and that it doesn't give advice to ships there.

That's a story likely to be repeated as long as there's no functional larger European agreement on refugees.

The NGOs point out that while the numbers of refugees arriving in Europe have declined dramatically since their peak in 2015 and 2016, thousands of people die every year trying to cross the Mediterranean. The United Nations International Organization for Migration has called that body of water "by far the world's deadliest border."