Lithuania's government has been targeted by an email hoax claiming that NATO troops were withdrawing from its territory. Officials accused the culprits of using the coronavirus crisis to sow discord among NATO allies. 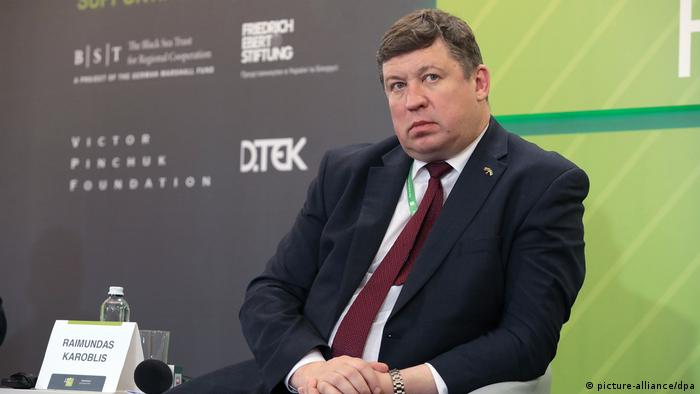 Lithuania's Defense Ministry announced on Wednesday that it had received an email purportedly sent by NATO Secretary-General Jens Stoltenberg saying that the organization was withdrawing its troops from the country. Similar falsified messages were also sent to NATO headquarters in Brussels and to Lithuanian media outlets, some of which published the story.

"It is one in a series of attempts to turn the pandemic crisis into a security crisis. Fake news like this piece are aimed at sowing distrust in our alliance partners and NATO unity," Defense Minister Raimundas Karoblis (pictured) said.

Karoblis added that there was a need to stay extra vigilant during the pandemic, as it had "created conditions for [security] threats to grow."

Read more: Should NATO be doing more to tackle the coronavirus?

The Foreign Ministry in Vilnius said that "malign actors" were trying to "cynically exploit" the global coronavirus crisis:

According to Lithuania's armed forces, hundreds of fake news stories have been circulating in the country relating to the novel coronavirus and its resulting disease, COVID-19. The purpose of many of them, the government said, is to "spread hostile messages against issues of strategic importance to the Republic of Lithuania," many of them increasingly related to NATO.

The dominant fabricated narratives established by investigators were, for example, that "the purpose of NATO has changed and NATO's existence now endangers NATO allies," or that NATO troops were behaving inappropriately in public places, prompting protests from Lithuanian citizens, as well as "claims that NATO finances nuclear weaponry instead of fighting COVID-19."

Other false stories included one that "a U.S. soldier in Lithuania was infected with the coronavirus" — which is similar to unsubstantiated rumors that have circulated in both Russia and China claiming that US soldiers were the source of the disease, and not transmission from an animal to a human somewhere near Wuhan, China. The predominant global scientific consensus of course remains the latter explanation.

While the Lithuanian Defense Ministry did not blame any specific actor for the attack, it said that most of the fake new stories, "almost two thirds, were in Russian" and that one common thread in many of the stories was to blame NATO for alleged "anti-Russian" rhetoric.

The added NATO presence in Lithuania is part of the broader NATO Enhanced Forward Presence strategy first adopted in 2016, amid growing tension with Russia, which deployed multinational battalion groups to Poland, Estonia, Latvia and Lithuania. The Lithuanian contingent incorporates troops from several NATO members, but is led by Germany's Bundeswehr.