Members of the Dogon tribe reportedly burned a large portion of a village belonging to Muslim Fulanis. Tensions between the two have surged since the government started battling extremists in its desert territories. 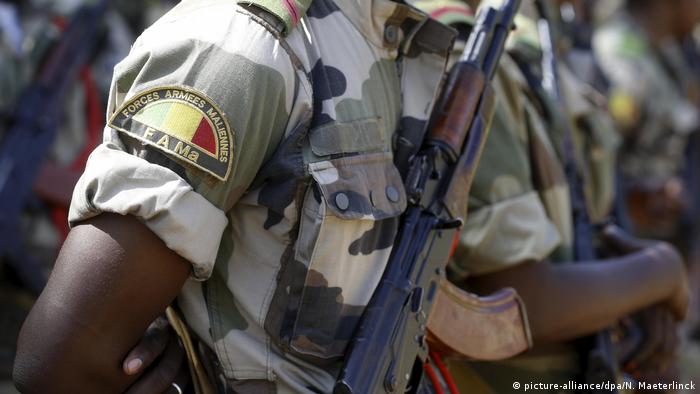 More than 130 people were killed in an attack on a village in central Mali on Saturday amid a growing wave of ethnic and Islamist violence in the West African nation.

Dozens more were injured in the massacre, which took place in Ogossagou, a village belonging to the Muslim Fulani ethnic group of herders.

Moulaye Guindo, mayor of the nearby town of Bankass, blamed the attack on traditional Dogon hunters, a group that has long coexisted with the Fulani, but the two have clashed repeatedly following the emergence of jihadi violence.

Two eyewitnesses told the Agence France-Presse news agency that nearly all the huts in the village were razed. A security source said the victims were shot or hacked to death with machetes.

Guindo said it was the deadliest attack in recent times. He reported that the nearby Fulani village of Welingara had also been attacked, causing "a number" of deaths, but he could not provide an exact figure.

Malian troops, along with local support, arrived at the site of the massacre later in the afternoon.

The attack took place as a delegation from the UN Security Council was visiting West Africa's Sahel region to evaluate the jihadist threat.

Repeated clashes have occured between the Fulani and the Dogon groups over grazing cattle on the other's land and disputes over access to land and water.

Members of the Dogon group have accused the Fulani of supporting jihadis linked to terror groups in the country's north and beyond.

But the Fulani have in turn accused the Dogon of supporting the Malian army's efforts to stamp out extremism.

Jihadi groups linked to al-Qaida and the "Islamic State" (IS) militant group have exploited ethnic rivalries in Mali and its neighbors Burkina Faso and Niger in recent years, with the goal of boosting recruitment and fostering lawlessness.

Once considered a beacon of democracy and stability in Africa, Mali has been crippled by a coup, civil war and Islamist terrorism since extremists took control of the desert north in early 2012.

Despite jihadis being driven out by a French-led military operation in January 2013, current efforts by UN peacekeepers and the creation of a five-nation military force, extremist violence in the region continues unabated.

German government planes have had a series of embarrassing problems in the past several months. Foreign Minister Heiko Maas is the latest to be stranded due to a plane defect. (28.02.2019)