Malaysian PM Mahathir has said the MH-17 investigative panel has offered no proof that Russians were involved in the disaster. His comments are at odds with the Malaysian representative on the team. 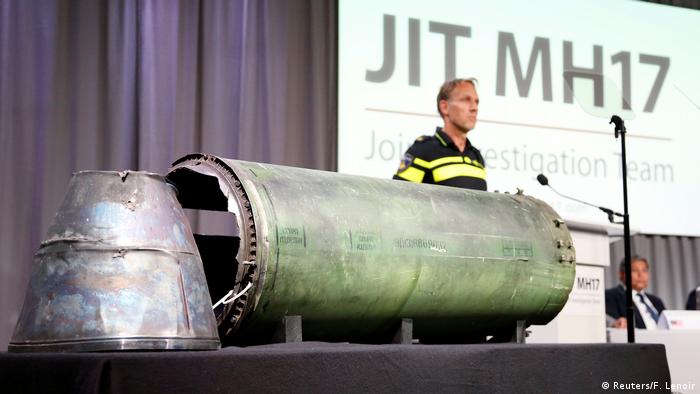 One day after murder charges were announced for three Russian nationals and one Ukrainian over the downing of Malaysia Airlines Flight 17 in 2014, the Dutch and Malaysian prime ministers on Thursday expressed very different reactions to the news.

Malaysian Prime Minister Mahathir Mohamad responded to the murder charges by saying Russia was being scapegoated for political reasons, remarks his Dutch counterpart Mark Rutte described as creating "confusion" for the relatives.

"We are very unhappy. From the very beginning, it became a political issue on how to accuse Russia of the wrongdoing," Mahathir said.

"Even before they examined the case, they have already claimed it was done by Russia," he told the news portal The Star. "As far as we are concerned, we want proof of guilt. But so far, there is no proof."

Russian President Vladimir Putin has also said the investigation did not offer any proof.

'Relatives must be very disappointed'

Rutte said he would not make any further statement on the charges until after he had spoken with the Malaysian government, but when asked about Mohamad's comments, he said, "I can imagine that relatives must be very disappointed about it and also that it sows confusion."

Mahathir's comments were at odds with the Malaysian representatives on the investigative team that had suggested the charges.

Malaysian prosecutor Mohamad Hanafiah bin Zakaria told reporters on Wednesday that the findings "are based on extensive investigations and also legal research," and that he supported the report's conclusions completely. Other members of the team were from Belgium, Ukraine, and Australia.

The team found that Russians Sergey Dubinsky, Oleg Pulatov and Igor Girkin, and Ukrainian Leonid Kharchenko were responsible for bringing the Russian army missile to eastern Ukraine that eventually shot down flight MH17.

On July 17, 2014, the flight was in transit between Amsterdam and Kuala Lumpur, when it fell out of the sky over the Donetsk Oblast, at that time a flashpoint of fighting between Ukrainian forces and Russian-backed separatists. All 298 crew and passengers perished, 196 of whom were Dutch.

Dutch Chief Prosecutor Fred Westerbeke said the suspects were believed to be responsible for bringing a Russian-made missile into eastern Ukraine "with the aim to shoot down an airplane."

Mahathir, 93, came back into power in 2018, after having previously ruled what many call an authoritarian regime from 1981 to 2003. During his first stint in office, he worked to establish good relations with what was then the Soviet Union and then an independent Russia.

The European Council said on Thursday that it would pressure Russia to hand over the suspects so they could stand trial.

Strongly supported by the US, the Dutch and Australian governments are holding Russia legally responsible for downing the Malaysia Airlines flight in 2014. Officials say they may take the case to an international court. (25.05.2018)